Toms River Mayor Maurice “Mo” Hill has penned a letter to the state Board of Public Utilities stating his opposition to a proposal from Verizon to withdraw or deny its FiOS service from some multifamily housing complexes in the township – including many on the barrier island along Route 35 and Bay Boulevard, including the large Docksider complex.

Verizon, unlike most cable providers, has a statewide franchise for its FiOS data and television service and does not negotiate agreements with municipal governments. In exchange for the statewide franchise, the legislature required the company to install the service in the most densely-populated municipalities in New Jersey, and in each county seat. In Ocean County, only Toms River, along with small portions of Brick and Seaside Heights, can receive FiOS service. Lavallette is expected to receive the service soon, though no other expansions are being planned, Verizon has said.

Specific to Hill’s concern, Verizon has requested the BPU allow the company to deny service to certain large multifamily housing complexes in 70 municipalities, including Toms River.


Lawanda R. Gilbert, Director of the BPU’s Office of Cable Television and Telecommunications, informed Hill of Verizon’s request for a waiver to their obligation to provide TV and Internet access to 24 multi-dwelling units in Toms River because the company “was unable to negotiate an access agreement with ownership/management” of those properties.

Hill’s office has been in touch with Verizon and offered to help them contact property owners they have been unable to reach, if any, a spokesman said Monday.

The list of multifamily communities is included below, along with the text of Hill’s latter. 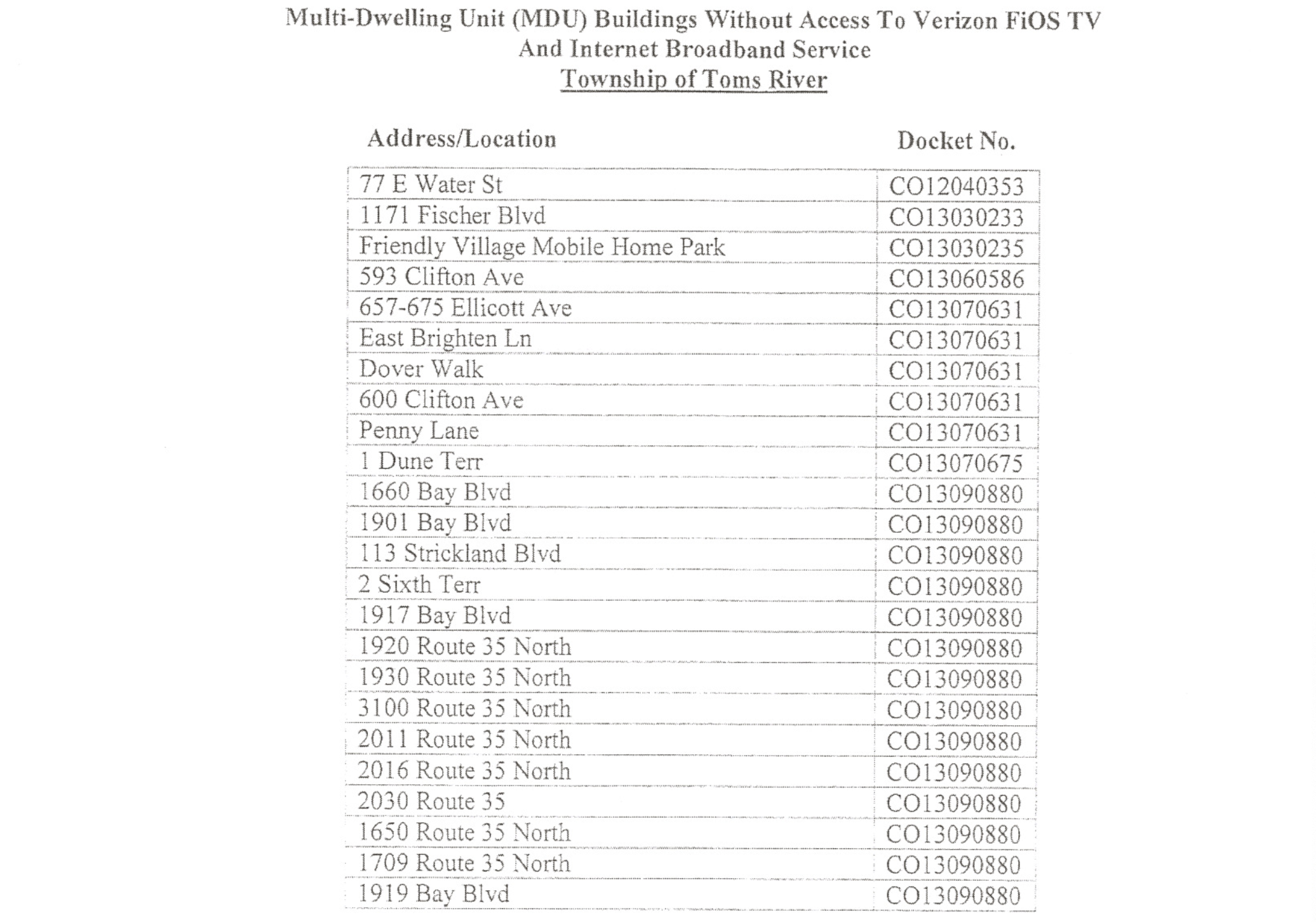 “My office has been in touch with stakeholders from three of the twenty four MDUs you referenced. We spoke with property managers, Home Owners Association Board Members and tenants. EACH of the MDUs represented indicated that their properties HAVE ACCESS to Verizon FiOs services now.  One of the properties has been wired with fiber optic cable within the last couple of months and the residents offered free service on a trial basis, according to their stakeholder.

“In your letter you state that should the BPU grant the waiver of Verizon’s legal obligation that residents of the listed MDU’s would not have access to FiOs or Broadband Internet.  Based upon available information, such a waiver could disrupt Toms River residents of the MDU’s access to vital communication, reduce their choices, and cause them undue inconvenience.

“I urge BPU to decline Verizon’s request for a waiver of access to MDUs in Toms River Township.  At the very least, I encourage the Board to postpone action on the waiver request until the matter is further investigated. Verizon’s request is inconsistent with the information that Toms River residents have provided to my staff.”