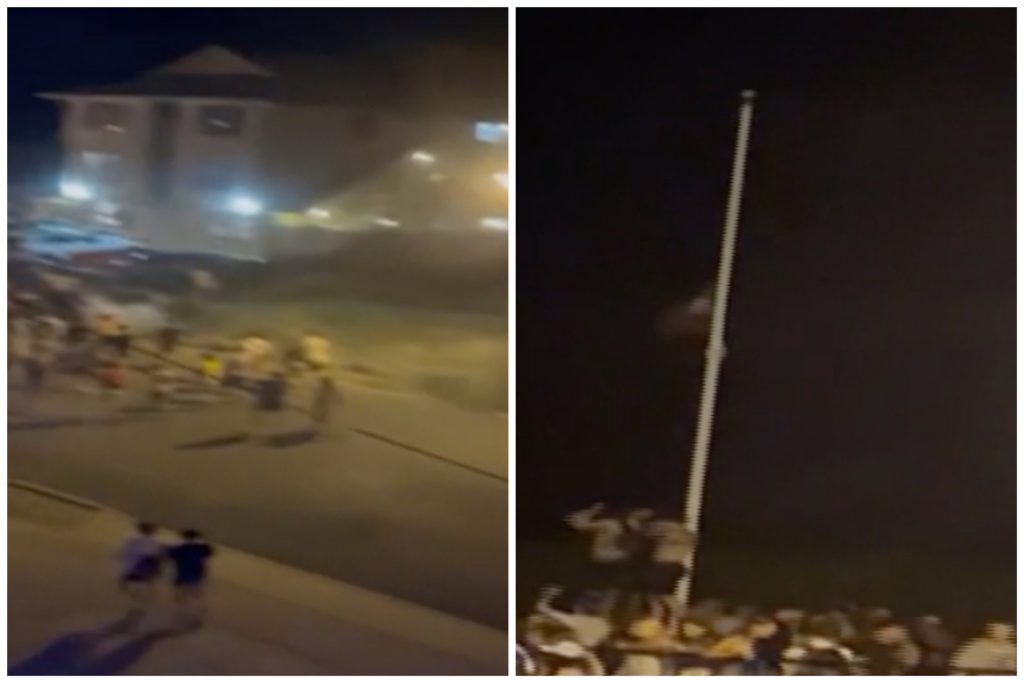 Screenshots from video of a riotous incident, July 4, 2022 in Ortley Beach. (Credit Unknown)

Toms River police released details of two incidents over the recent Independence Day holiday period that recounted a violent mob scene playing out in Ortley Beach, with hundreds of teenagers – many intoxicated – openly taunting police officers and, at times, resorting to violence.

Over the past year, state policies on police interactions with juveniles have come under the microscope, with concerns raised over directives which bar officers from speaking with, arresting or notifying parents about illegal activities in certain circumstances. Under social justice legislation adopted over the past two years, officers could be charged with civil rights offenses if they violate the policies. The recent incidents in Ortley Beach strongly indicate that teens have caught on, challenging officers and ultimately throwing rocks at them.

Most teens in the area for the holiday weekend were “frequenting local businesses and engaging in lawful activities,” said police spokeswoman Jillian Messina, but two incidents – recounted below by police in a statement issued Friday – generated a significant police response.

The first – and smaller – incident occurred July 3, 2022, at about 11:30 p.m., when officers responded to the beach in the area of E. Colony Road and S. Surf Road in Silver Beach for a report from private security of roughly 40 to 50 kids refusing to leave. Upon arrival, officers asked the group to disperse, and the participants did so without incident.

While walking back down the street, however, the officer “heard a male within a small group begin to shout obscenities.”

Residents from several houses came outside and the officer advised the male to walk quietly and not to disturb the residents in the area, Messina said. As he was approaching the male, “the officer observed him steal a decorative sign from the front of a residence and walk away with the stolen property.” He was told to stop, but allegedly looked back at the officer and began to run. A foot pursuit ensued, and he was ultimately taken into custody.

While the male stated he was a juvenile, and told the officer to let him go in reference to the state policy on police interactions with teens, it was later confirmed he was 18-years-old. He was ultimately identified as Andre Baskapan, 18 of Park Ridge, and was brought to the municipal jail without further incident. He was charged with theft, resisting arrest and disorderly conduct.

The second serious incident of the holiday weekend occurred on July 4, and involved hundreds of teens causing a disturbance in Ortley Beach. The raucous scene was discussed at length on social media, but a detailed account from police was just released Friday.

According to Messina, police initially received a call at 8:57 p.m. from Fourth Avenue and the oceanfront in Ortley Beach. The caller told dispatchers that there was a disturbance building that may have involved a knife.

“Finding the report unfounded, officers began to engage the large crowd,” Messina said. “Just before the 11 p.m. curfew, officers directed the crowd of approximately 400 to 500 kids out of the area for the evening.”

At that point, the group began walking in the middle of roadways, blocking traffic. After several attempts to disperse the crowd and clear the roadway, a juvenile female turned toward the officer, held up her middle finger, and repeatedly yelled explicitatives at him, police said. The officer instructed her to move out of the roadway, at which point the female turned back and attempted to strike the officer, Messina said.

“With approximately 200 to 300 juveniles now gathered in close proximity, the officer escorted the female to side of the roadway and she began to struggle, yelling at him, flailing her arms, and kicking him multiple times,” said Messina. “Continuing to fight, she was arrested and placed in the patrol vehicle. The crowd of juveniles began to yell, throw rocks, and attempt to interfere, both verbally and physically, with the officer and arriving officers.”

The female was transported to police headquarters where she was processed and released to her mother, “who acknowledged she was aware her 16-year-old daughter would have a couple of drinks while at the beach that evening.” The juvenile, from Milburn, Essex County, was cited for a curfew violation, disorderly conduct, and resisting arrest. Neither her name nor photograph were released publicly.

Residents in the area woke up to property damage, and their community littered with garbage and alcohol containers, forcing the township’s Public Works employees to “address the additional nuisance,” police said in the statement.

“Our beach community is enjoyed by residents and guests year round, and while we welcome visitors from near and far, we will not tolerate disrespect and destruction,” the statement said. “Please do not drop off children and leave them without supervision.”

“This is becoming an increasing issue with most shore towns, it is not just in our area. Social media definitely fuels the gatherings to levels we haven’t seen before. We are taking a measured response to the issue and providing more coverage in our beach community. Fortunately the State and acting Attorney General have recognized the need for assistance and have opened a line of communication in partnership with the Prosecutor’s Office and law enforcement agencies.”

Toms River police responded to a total of 628 calls during the holiday weekend. Of those, 195, or about 30 percent, were generated from the barrier island. The majority of the calls involving juveniles – 24 out of 34 – originated from the island.