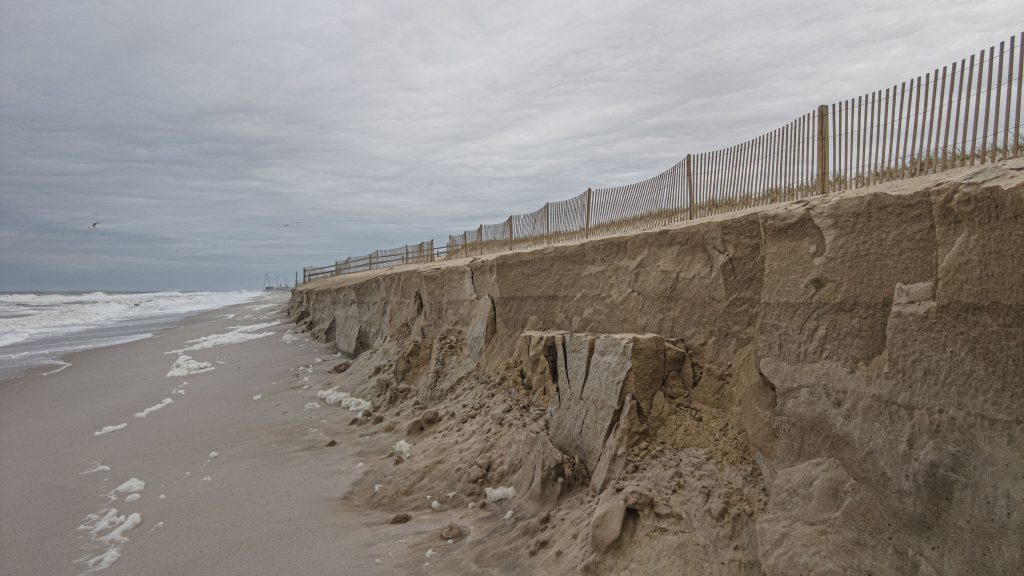 Toms River officials have authorized the purchase of emergency beach sand and repairs following a late-season nor’easter that damaged beaches earlier this week – the second year in a row a storm pummeled the Ortley Beach neighborhood shortly before Memorial Day weekend.

The beach “has been eroded by northeast storms which have been constant since Saturday,” Mayor Maurice “Mo” Hill said, adding that winds and tides have continued to affect the oceanfront all week long, making quick repair work impossible. “Hopefully, we may see some sand redeposited.”

Indeed, spring tides generally bring sand that has languished on an outer bar closer to the beach berm, widening the overall beachfront area. But so far this season, beaches have continued to erode. The U.S. Army Corps of Engineers is scheduled to complete a maintenance replenishment project in town this fall, which had officials hoping they would be able to avoid the purchase of more sand that would be trucked in, but the damage appeared too serious to wait.

Last year, a storm that rolled ashore just before Memorial Day caused several hundred thousand dollars worth of damage to beaches and beach entrances. The federal government have approved disaster reimbursement funds for that storm, but the township has yet to receive the payout. When the Army Corps returns this fall, they have pledged to re-engineer the beach in Ortley Beach to forge a long-term solution to the erosion issue, which is most pronounced in front of the Golden Gull condominium building and the former Joey Harrison’s Surf Club property.

“They told us that they would find hot spots, and they turned out to be Ortley Beach, Mantoloking and Bay Head,” Hill said, of the Army Corps. The mayor plans to meet with U.S. Rep. Chris Smith (R-4) next week on the issue.

Hill stressed that despite the impact of the nor’easter, 75 percent of the township’s beach entrances remain open.

“The only part of the beach that is really badly affected is near the Surf Club, and we don’t have entrances there yet,” said Hill.

Township Engineer Robert Chankalian said after bids are received, the township council is expected to award a contract and the sand deliveries and placement will begin. It will take about two weeks for the sand to be spread and the entrances to be shored up. The work will be completed in time for the summer bathing season, but may cost about $200,000.

Hill, for his part, said local officials must keep the pressure on their federal counterparts to ensure the replenishment work scheduled for the fall is not delayed or redirected elsewhere. Despite the erosion, however, a silver lining in the recent spate of storms is the continued success of the engineered dune. While the beach berm has been reduced significantly, the physical dune barrier has remained completely intact without a hint of a threat of an ocean breach.

“It’s integral to the economy not only of Toms River but Ocean County and the Jersey Shore,” he said. “The good news is that the dunes are protecting the barrier island from damage. I think their plan worked fairly well.”