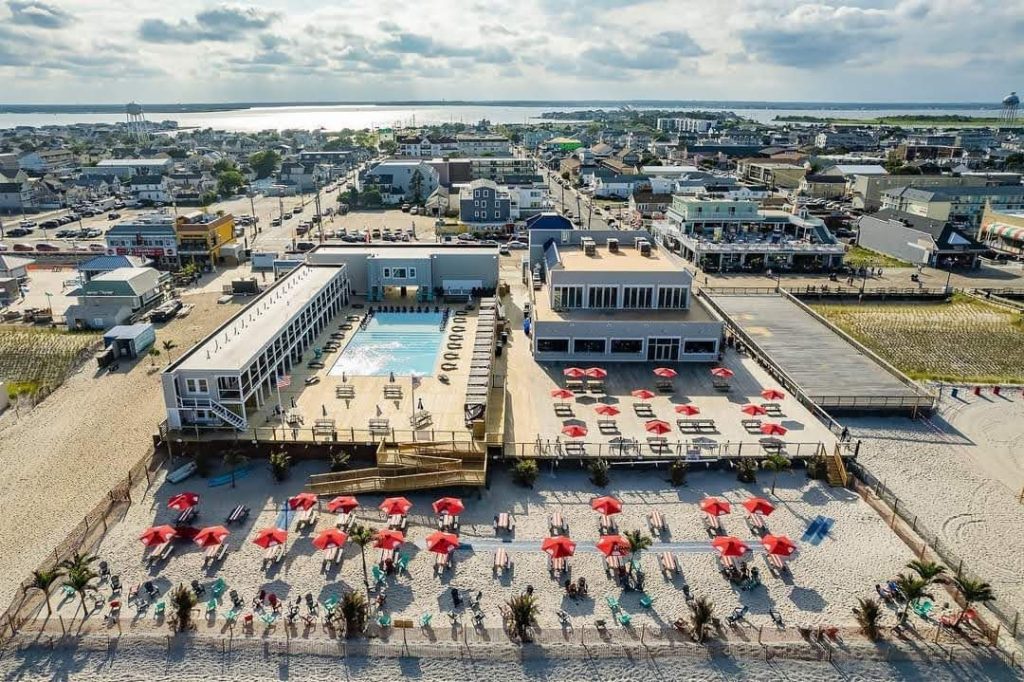 Among the most ambitious projects ever proposed in Seaside Heights, the Ocean Club complex at the southern end of the borough’s boardwalk was born out the wreckage of Superstorm Sandy, with its owners – a group of Shore locals – having taken a chance on the town to develop the former Beach Bar pier and beyond.

The Ocean Club is much more than the bar it replaced. Expanded over several blocks, and encompassing about a dozen shops and eateries located in kiosks on the adjacent boardwalk, the complex consists of a modern, luxury open-air bar and restaurant open to the public, a beach area that welcomes daily and seasonal visitors, cabanas that can be rented for the summer and a banquet facility that overlooks the Atlantic Ocean. 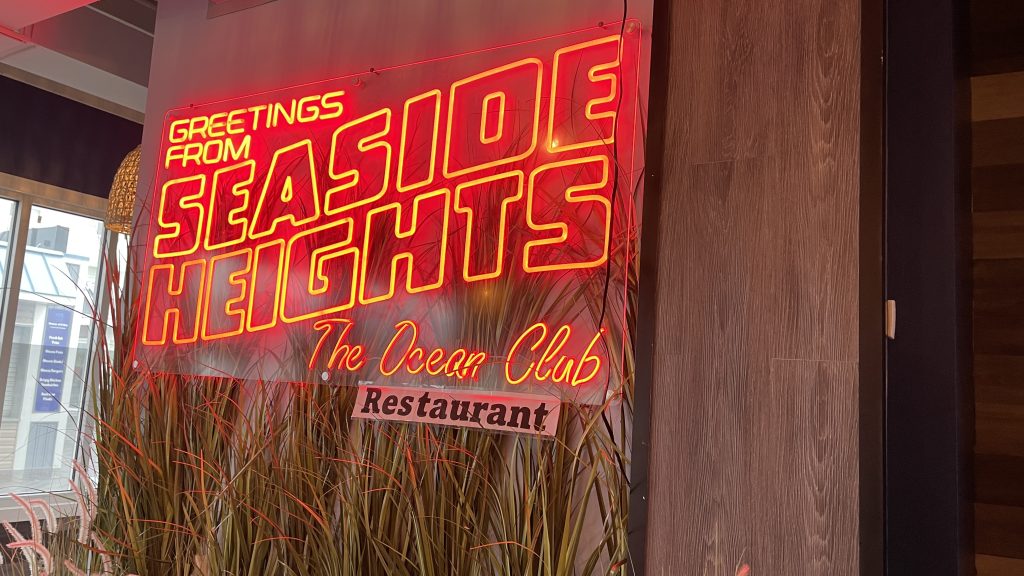 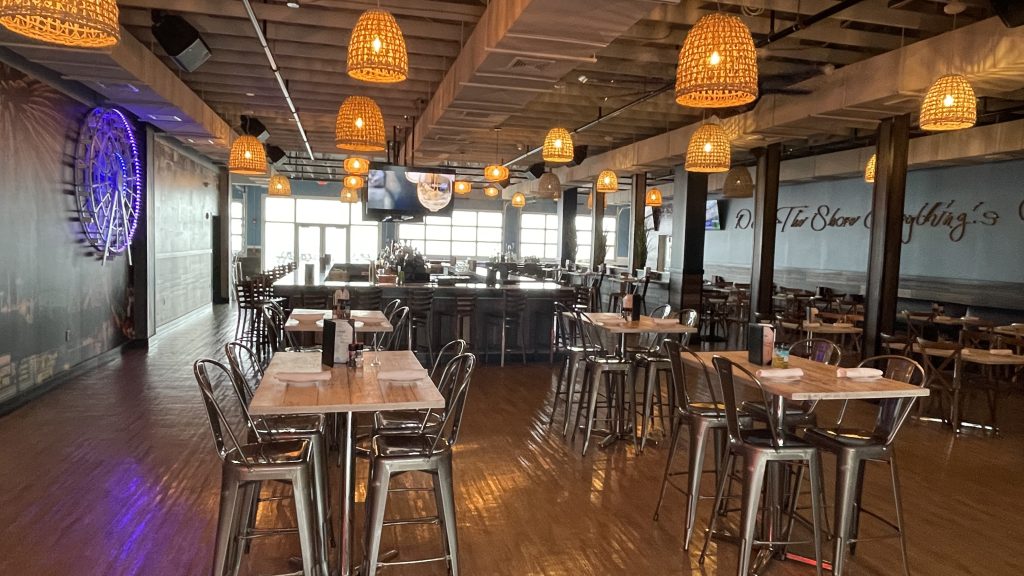 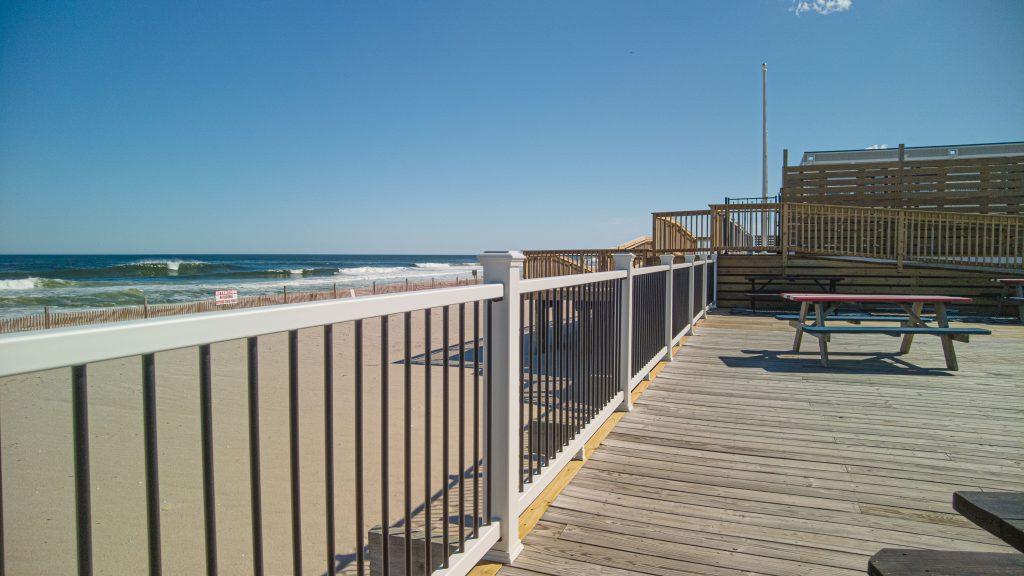 “We’re all local guys,” said Michael Mabie, one of the principals of the Ocean Club, of he and his fellow entrepreneurs. “We grew up in the area – my grandfather came here in the mid-1930s. We always came to Seaside Heights as kids, and it was great, but then we saw things going the wrong way. Nobody really liked seeing what was happening, and we saw an opportunity with this piece of property and thought we could do something special on it.”

Indeed, the Ocean Club complex was one of the first major redevelopment efforts in the borough, and it has proven to be far from last. Since construction got underway, numerous other boardwalk businesses have begun improving their aesthetics and developers are reaching the community with an influx of modern, high-value, mixed-use properties that will soon dot the Boulevard business district. Much of the development, both business leaders and officials agree, is a product of a conscious shift by the borough to dissuade the partying displayed in years of MTV series set in town and encourage family-friendly, higher-end development in line with other successful resort communities.

“We basically just took raw land and came up with some ideas on what to do with it, but it wasn’t just something we stumbled across,” said Mabie. “We had a lot of admiration for the town and we saw what it could be again. We thought maybe we could help be a catalyst. We went back-and-forth with architects and engineers, and what you see today is something that’s been five years in the making.”

Some questioned the size of the Ocean Club complex when it was first proposed, and expressed concern that it could become another costly venture into the world of Shore nightlife that has left empty buildings and reputational issues in its wake. But the Ocean Club’s ownership bought into the vision officials were dreaming up, with the end result being a premium bar and restaurant on the ocean, a beach with family-friendly activities, and a world-class cabana facility with a pool and concierge services. A plan to build a concert venue at the southern portion of the site is no longer under development.

“Right now, it’s been tabled,” Mabie said, of the concert area. “There’s no development on that. It would have been on the farthest-south parcel, but as of right now it’s not moving forward.”

The Ocean Club staff has marketed its businesses with the trends of the time. A sign outside the facility, facing boardwalk, advertises to passersby that one can “Work from you cabana this summer!” As of last month, 90 percent of the units were rented for the upcoming season, and there are currently only a few left. Units in certain sizes are already sold out and a waiting list has been established. 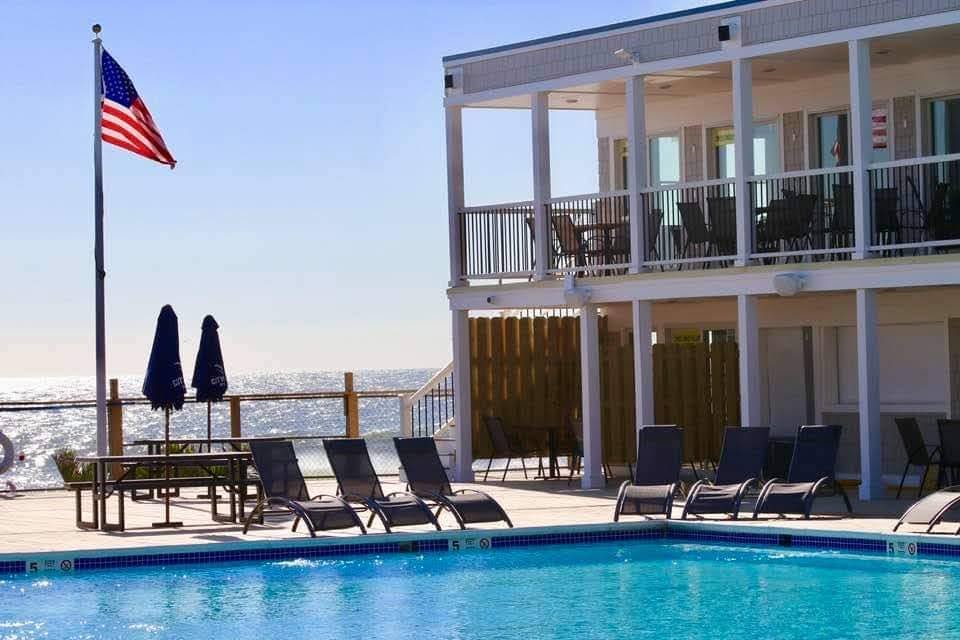 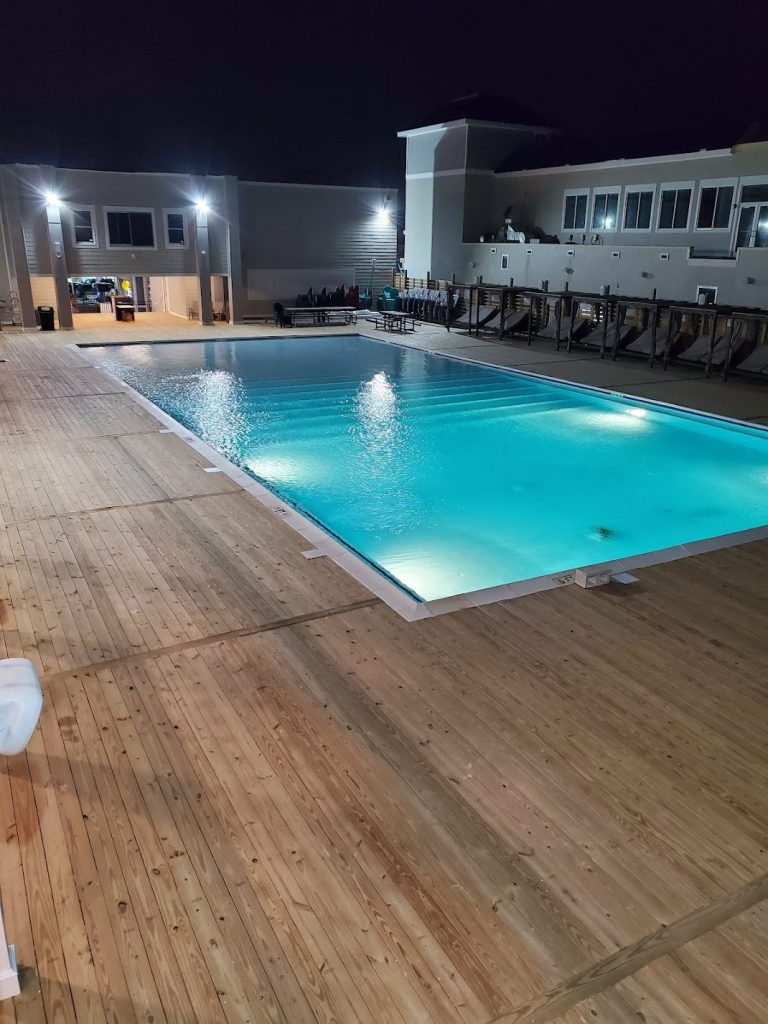 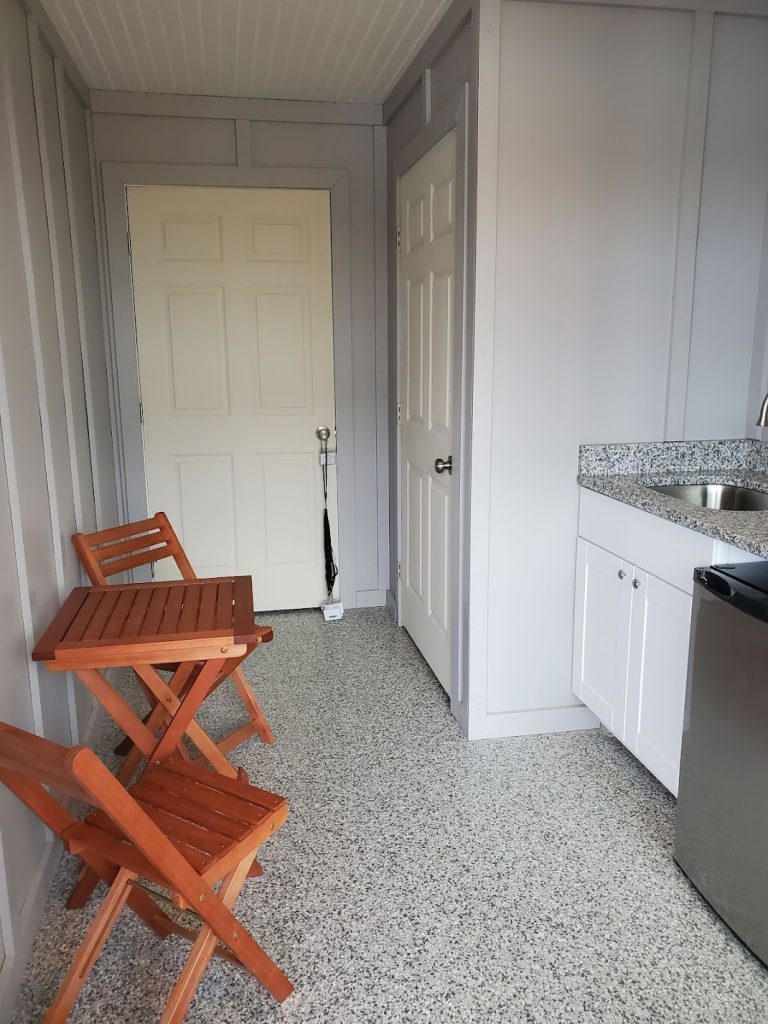 “The pool is ready, the cabanas are done, and the demand has been overwhelming,” Mabie said in the restaurant, having just leased a unit before speaking with Shorebeat.

Daily operations at the Ocean Club will be reminiscent of traditional Shore life in the summertime, with the bar featuring an oceanfront happy hour every day from 4-7 p.m. on the deck, and specials like Taco Tuesdays, Sunday Brunch and other promotions. Then there will be light entertainment, a clam bake, movies on the beach and other activities. Beachgoers can order food and drink service from the restaurant while relaxing on the sand – and those who rent cabanas have access to room service every day.

“We’re going to do lots of things this summer that are family-friendly and kid-oriented,” said Mabie. “Mom and dad can relax and have a drink and the kids will have something safe and fun to do. We’re looking to do movies on the beach for kids, a lot of country-themed type events like line dancing on the deck, and some acoustical music.”

Local surfer Sam Hammer, of Lavallette, will host a surf camp on the beach during the season.

The Ocean Club restaurant is a sprawling facility with stunning architecture and decor, including a customer-favorite “Down the Shore, Everything’s Alright” mural adorning the south wall. The bar and dining room opens up to an expansive deck on the oceanfront pier. Upstairs, a banquet hall – essentially, the only oceanfront banquet facility in the local area – will open this season to serve parties of about 150 guests.

“The second floor banquet facility should be done very soon,” said Mabie. “We’re waiting on a few finishing touches to the elevators and a couple of other things, but we’re going to be ready to go. Weddings, family events, corporate events – anything you can imagine.”

Three levels of cabanas are offered for seasonal rentals running from $10,000 to $27,500 per year. The cabanas feature different sizes and amenities, including access to the pool and beach, Wifi, electrical connections, and a daybed in the smaller units, and additional features such as private balconies, indoor dining areas, kitcheonettes, flat panel displays and storage space in the larger units.

As the Ocean Club prepares for its first full season operating the restaurant, beach and cabanas, the site is still growing into its own. The northernmost pier on the property will eventually host a casual restaurant with boardwalk fare and no alcohol, while the Mabie Group – the collective name of the Ocean Club’s parent company – has leased space on the boardwalk to a host of specialty restaurants and shops. This season, visitors will be able to stop at small eateries specializing in Spanish tapas, gourmet macaroni and cheese, freshly-made French fries, Anthony’s Italian Deli, a southern barbecue stand and Hawaiian-themed Big Kahuna. 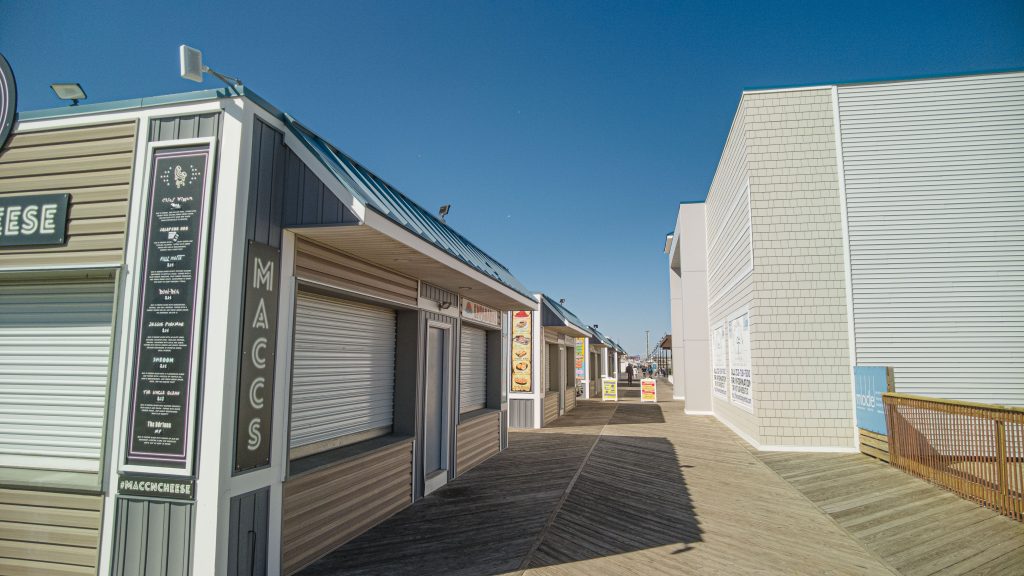 With an initial round of success in attracting a cadre of loyal, local patrons to the restaurant during the winter and spring, as well as renting nearly all of the cabana inventory to seasonal visitors, the Ocean Club is poised to become an example of successful boardwalk redevelopment in the town’s new image.

“We see what’s happening in town and they’re doing some wonderful things,” said Mabie. ” They’re welcome people into town and making everything positive. There are a lot of developments coming here, and it’s an exciting time.”