The property where two homes will be built at the corner of Hiering and Bay avenues in Seaside Heights, May 2022. (Photo: Daniel Nee)

Seaside Heights’ planning board this week approved a developer’s application to build two new homes on a parcel of land that has long been in need of some work.

The board approved two applications by CAS International Improvements to construct two homes at the corner of Hiering Avenue and Bay Avenue. One of the homes will replace an older structure currently existing on the property, and the other will fill in an area that is currently semi-overgrown being used for storage. The homes will be built at 1516 Bay Boulevard and 323 Hiering Avenue. The address of the Bay Avenue home may be changed after construction, an attorney representing the developer said.

“We want people to be able to see the views to the west, the sunsets and the open water,” said Jason Marciano of East Coast Engineering, who was hired to work on the project. 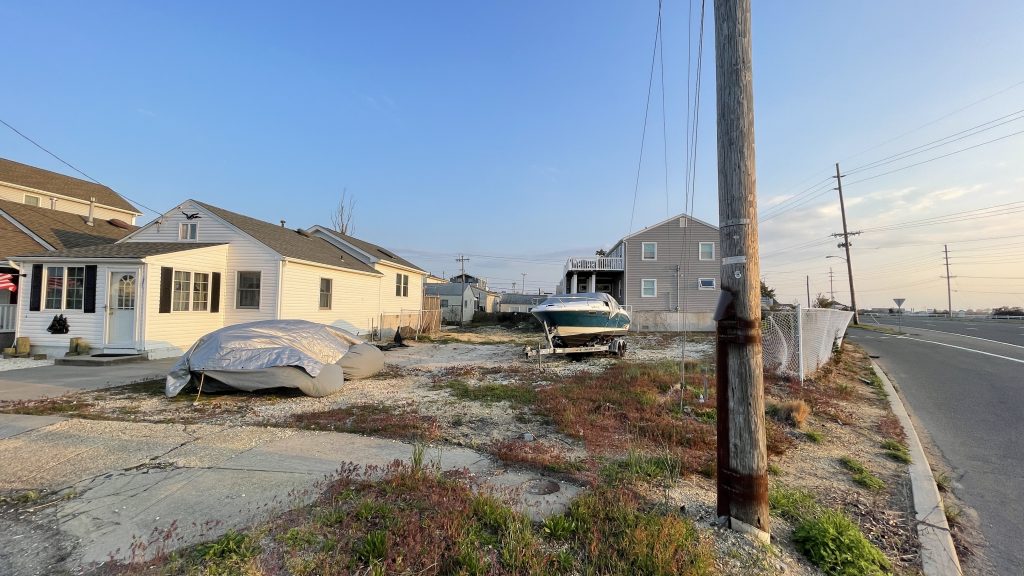 The property where two homes will be built at the corner of Hiering and Bay avenues in Seaside Heights, May 2022. (Photo: Daniel Nee)

The board granted permission for CAS to build a 3-story home on the 2,443 square foot property on Bay. Initially, CAS had asked for a variance to build to 46-feet in height, however input from board members and professionals led to a modified variance being approved that limited the height to 41 feet. The borough’s ordinance limits homes to 35 feet, however the extra height was requested due to the grading of the lot, as well as its location near Route 35, which opens up a view of the water to a future homeowner.

The second home, on Hiering, will also be a 3-story home on a 3,032 square foot property.

Both homes will feature driveways that can acommodate at least two cars each, with additional parking underneath the piling foundation of the home. The plethora of parking spaces eased any concerns over room for cars on the dead-end street, which ends in a small cul-de-sac and is flanked by the state highway to the north.