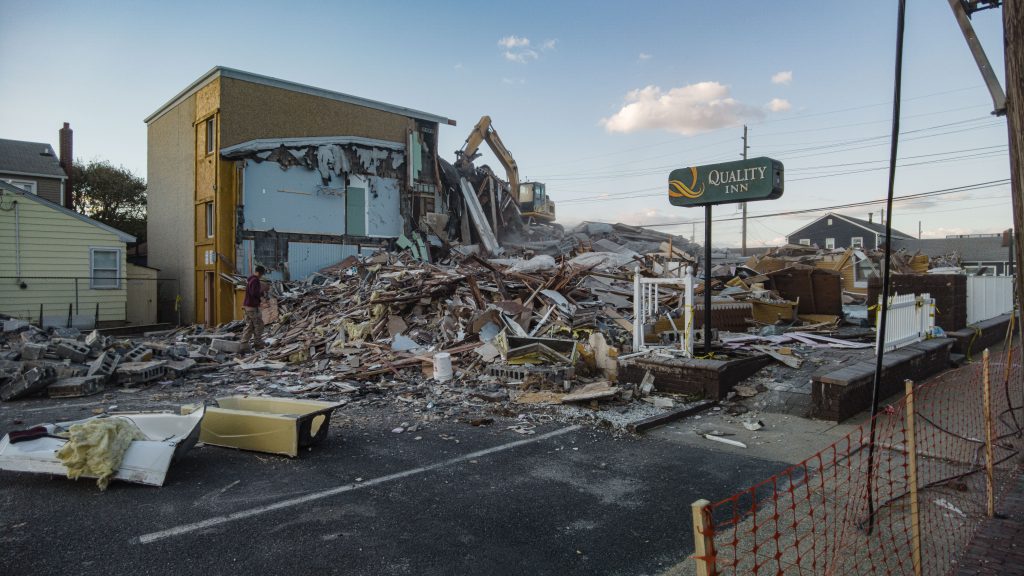 With the number of motels in Seaside Heights dwindling rapidly as redevelopment efforts are increasingly leading to high-end residential and mixed use construction, the borough council last week voted to endorse an effort by Ocean County to solidify plans to facilitate a homeless shelter on the mainland.

Seaside Heights has long shouldered the burden of the county’s homeless problem, with motels utilized for temporary housing in the absence of a formal shelter. The motels were the subject of a notorious expose in the Star-Ledger in 2014, and a major thrust behind the establishment of a quality-of-life task force in town. Advocates for the homeless have, for years, held that lodging homeless people in motels is insufficient, and the barrier island location cuts them off from mental health, substance abuse and long-term housing services.

Ocean County is the only county in New Jersey that does not have a homeless shelter – something nonprofit organizers and, occasionally, officials have taken up as a cause for years. A court order prevented the county from moving homeless people to the Atlantic City Rescue Mission, a previous destination, and officials are now seeing more people living in the woods and on the streets following the upheaval of the coronavirus pandemic. But officials are also seeing more support in the community for a shelter to be established, and say many of the pieces are in place as soon as a suitable location can be found.


“I think, right now, there is more positive interest in doing it than there has been in many years,” said Ocean County Commissioner Gary Quinn. “Bobbi Jo [Crea], being on Social Services, has really been working on it, and Ginny [Haines] and I have been working on it since we joined the board.”

Quinn said he has met with local attorney and former Toms River Township councilman Terrance Turnbach – a dedicated advocate and volunteer for the hungry and homeless – on the issue, as well as Paul Hulse, another advocate who serves as director of Believe Inc., a local nonprofit.

“The county doesn’t want to build it or own it – that’s our biggest hangup – but we’ve spoken to a lot of nonprofits who would like to do it as partners,” said Quinn. “Finding a location is an issue. We thought we had a location out in Jackson two years ago that the county had purchased for a jail, but we reached out to Jackson to see if there was an issue with that, and they did not want it to be built on that piece of property in their town.”

Seaside Heights Mayor Anthony Vaz said his town has been engaging with the county for several years. Last week, the borough council voted in favor of a formal resolution supporting the county’s investigation into the establishment of a shelter.

“The county, for some reason, was hesitant but now they’re seeing there’s a problem,” said Vaz. “They see that there is a problem in not just our community, but other seashore communities that don’t have too many rentals in the winter anymore.”

Coincidentally, mere minutes after the April 20, 2022 Seaside Heights council meeting, a woman approached a Shorebeat reporter near Casino Pier after seeing a vehicle press placard in the windshield, and asked for help finding a place to stay. Jennifer, the woman, sat with her son next to the boardwalk entrance crying, saying her husband has been suffering from severe mental health issues and the family just lost the place where they had been living.

“They said they can’t help today,” the woman replied, after the reporter shared the phone numbers of several social service agencies, but she left extra messages anyway despite the fact that it was after 6 p.m. and the sun would be setting soon.

The turnaround of Seaside Heights, which is experiencing an avalanche of redevelopment following the MTV era, Superstorm Sandy, and the 2013 boardwalk fire, is leading motel owners to sell their properties. In a few cases, the borough has taken action after the motels generated large numbers of calls to the police department and were the location of repeated drug busts. The environment, officials said, is the opposite of what the local homeless population needs.

“On the island, north or south, it’s difficult to get the mainland, especially if you can’t afford a car or other services,” said Vaz, a retired schools superintendent. “We’re recommending a study on the mainland for a facility that would be near medical providers, schools and job training.”

Quinn agreed on the key to the success of a shelter being access to services.

“You don’t want to necessarily put it near an area where there is a major highway as much as you’d want to put it somewhere that people would have the ability to access services that are provided,” Quinn said.

The Toms River community, in particular, has been supportive of initiatives to benefit the homeless, and the municipal government has taken steps including opening up warming shelters and supporting nonprofits that provide food and other services.

“We’re gearing more toward Toms River because Toms River has been extremely supportive of the homeless issue itself,” said Quinn.

Toms River also has areas of open space, access to bus transportation, and is the location of a forthcoming social services building and VA outpatient clinic on Hooper Avenue.

“They’ve been great,” Quinn said. “Toms River is big enough where you could locate it outside of the residential areas, which seems to be the biggest objection people have.”

The issue could see movement soon, as Quinn and colleagues from the county are due to meet with Turnbach and nonprofit leaders who could obtain funding to support a housing facility.

“There’s money available out there, a lot of grants out there, and we’re currently spending a couple hundred thousand dollars on an annual basis to put people up in hotels,” said Quinn. “I really feel better now this year than the last three years I’ve been on the board, seeing all of the positives.”

“There are a lot of good players involved, so we just have to narrow down a location,” he continued. “Once that’s chosen, I don’t think there will be too many issues in getting this built.”