Meet The Fleet: These Joint Base Planes Are Front and Center in Ukraine Crisis

Shorebeat has identified, through air traffic logs, at least nine planes from the base that have flown over the Europe with their transponders turned on, openly advertising their presence. Representatives from the base confirmed the mission, which is generally under the command on U.S. Air Forces Europe (USAFE).

“Aircraft from the 305th Air Mobility Wing at Joint Base McGuire-Dix-Lakehurst, N.J., have been in support of the movement of U.S. forces deploying to Europe, as part our longstanding commitment to European security and to reassure our NATO Allies,” said Derek VanHorn, Public Affairs Officer at the base.

The specific operational duties of the aircraft “remain under the purview of the Secretary of Defense,” he said.


As part of one operation that was publicly acknowledged, airmen from the local base joined with their counterparts from Pope Army Airfield, N.C. and Joint Base Charleston, S.C., as part of Task Force Gryphon. The service members operated a 24-hour schedule to coordinate the transportation and delivery of personnel and cargo to Poland and Germany, officials said. 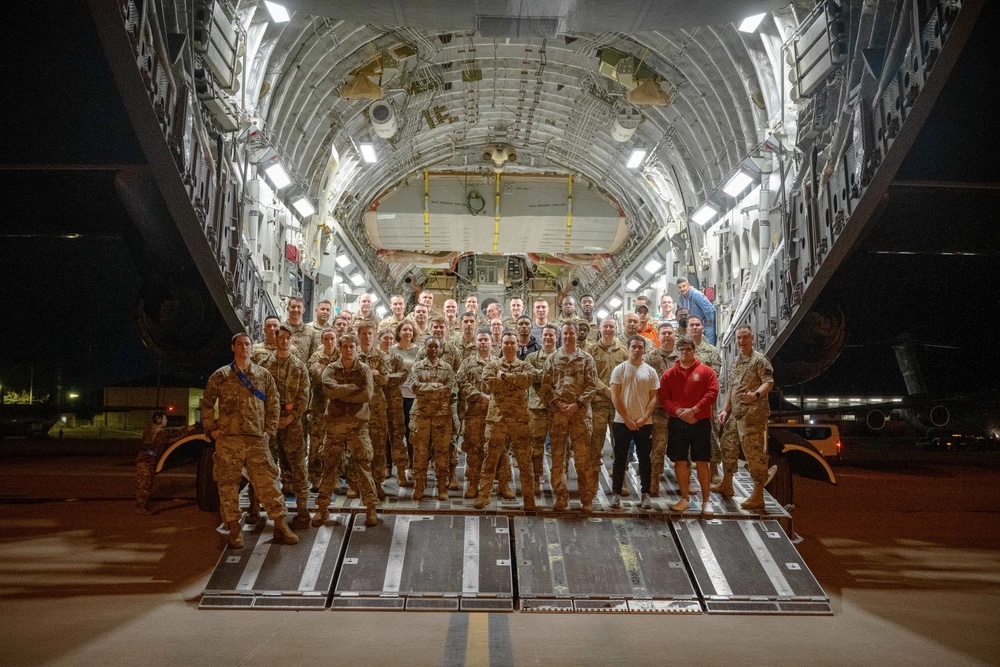 U.S. Air Force Airmen from Pope Army Airfield, North Carolina, Joint Base Charleston, South Carolina, and Joint Base McGuire-Dix-Lakehurst, New Jersey, take a moment to pose on a C-17 at Pope AAF Feb. 16, 2022. The team, Task Force Gryphon, operated a 24-hour schedule to coordinate the transportation and delivery of personnel and cargo to Poland and Germany in the United States steadfast commitment to Ukraine’s sovereignty and territorial integrity in support of a secure and prosperous Ukraine. (U.S. Air Force photo/Staff Sgt. Katelynn Thomas)

Flight monitoring has identified eight planes from the base, and one which operated from the base, which have been providing pivotal support in Europe. The majority of the planes are C-17 cargo aircraft, most of which were delivered in 2004. The C-17 is the workhorse of the U.S. Air Force and serves as its medium cargo jet, between the smaller turboprop C-130 and the larger Lockheed C-5M Galaxy, which – perhaps ironically – had been the longest and heaviest plane in the world before the debut of the Antonov An-225 Mriya, only one of which was ever built and is feared destroyed at its home air base near Kyiv.

The remainder of the Joint Base’s aircraft participating in the European mission appear to be the KC-10 Extender aerial refueling platform, a derivative of the Douglas DC-10 triple-engine airliner. The KC-10 is the Air Force’s largest tanker, filling the service’s “global mobility” mission. The Joint Base has also been selected to host the smaller KC-46 tanker, based on the Boeing 767 airliner, though the base received its first planes just weeks ago and they have not appeared to have been taking part in the Ukraine support mission.

The KC-10s have been refueling a number of different American and NATO platforms operating in the area. Though U.S. aircraft are no longer working within Ukrainian airspace, assets such as the E-3 Sentry AWACS, E-8 Joint STARS battlefield management platform and RC-135 Rivet Joint/Combat Sent electronic intelligence gathering aircraft are operating just outside its borders. There have also been deployments of B-52 bombers and various fighters, though their positions are rarely publicly tracked. Sweden, for its part, has been deploying its Saab 340-based airborne early warning and intelligence-gathering aircraft near the Russian exclave of Kaliningrad. The U.S. Army’s fixed-wing ARTEMIS experimental system has also been patrolling the region, utilizing its unique synthetic aperture radar technology to keep tabs on developments in the region.

Here are the locally-based aircraft that have been taking part in the mission:

C-5M (Operated from, but not based at, JBMDL)