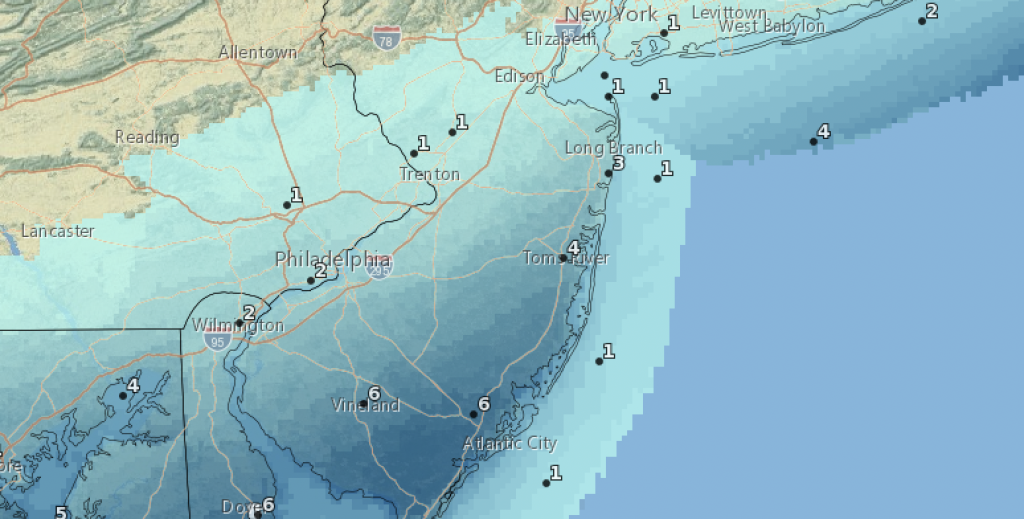 The National Weather Service has issued a winter storm warning for the entire southern half of New Jersey as forecasts have evolved to increase snowfall totals beyond what had been previously predicted.

An updated forecast from the NWS’s office in Mount Holly shows that snowfall accumulation is subject to change quickly, though trends have been bulking up the expected amount in Ocean County. Though the official forecast has increased to 3-4 inches of snow, a statement from the NWS warned that some areas could see 4-6 inch totals. At four inches, most towns and other public works agencies begin plowing streets, invoking parking rules.

“Heavy snow is expected,” the warning statement said. “Total snow accumulations of 4 to 6 inches [with] winds gusting as high as 35 m.p.h. are possible. Travel will become very difficult. The hazardous conditions could impact the morning commute.”

We have issued a Winter Storm Warning and Winter Weather Advisory for the upcoming winter storm. Rain will quickly transition to snow late tonight, leading to a disruptive AM commute. Heaviest snowfall will remain along and SE of the I-95 corridor. ❄️#PAwx #NJwx #MDwx #DEwx pic.twitter.com/bfVlXkKAUr

“If you must travel, keep an extra flashlight, food and water in your vehicle in case of an emergency,” the warning statement went on to say.

The official NWS forecast calls for a chance of rain, snow, and sleet between 2-3 a.m. Monday, then a chance of snow after 3 a.m. It will be cloudy, with a low around 29. Total nighttime snow and sleet accumulation of less than a half inch is possible.

But we also had a couple of snowless Decembers (2011 and 2001) that had no measurable snow in Dec. and totaled only 4" for the ENTIRE winter.

The bulk of the storm will move in after 3 a.m. and last through about 12 noon Monday. The high temperature is forecast to be 35 degrees, and the overnight low will be 17 degrees. The forecast calls for 3-5 inches of snow, though an extra inch or two is possible in localized areas.

Skies will begin clearing overnight between Monday and Tuesday, and sun will return Tuesday with a high of 36 degrees.