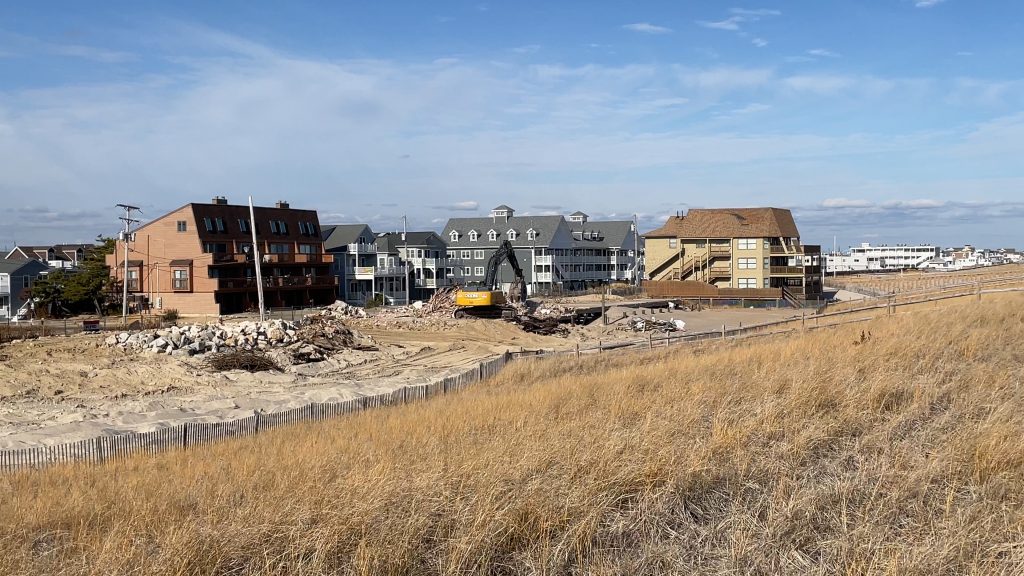 Toms River officials delivered on their pledge to bring the former Joey Harrison’s Surf Club property under public ownership by the end of 2021. And now that the new year is upon us, the focus of both officials and residents has turned to the future of the oceanfront site.

There is no formal architectural rendering for what will ultimately be proposed to the state Department of Environmental Protection for approval, but Toms River officials have drawn up sketches and have begun engaging with their counterparts in Trenton to develop a plan that will preserve the natural space of the site while adding some amenities to increase beach access. Any plan will require Trenton’s approval since the vast majority of the funding for the $7.3 million acquisition came from the state’s Blue Acres program, which utilizes state dollars to purchase flood-prone properties in order to prevent future commercial or residential development.

Mayor Maurice “Mo” Hill told Shorebeat that the current plans for the site include taking up the pavement and rubble in the former nightclub’s parking lot across from the beach entrance. That lot will be open to the public for beach parking.


“The parking lot will have a clamshell surface – the state didn’t want it paved – and it will be similar to the lot of the old First Aid station in Ortley Beach,” said Hill.

The primary amenity slated to be added to the site is an extended boardwalk. Ortley Beach’s boardwalk currently exists in two portions, separated by two condominium complexes – the Golden Gull and another that was located directly beside the Surf Club. The gap causes the boardwalk to break up between roughly 7th and 5th avenues. The boardwalk will not be able to be fully re-connected since the condominium properties are privately-owned, however there are plans to extend the southern portion of the boardwalk into the area where the Surf Club stood.

“The plan is to make it elevated – with a gradual elevation – so people can see over the dunes,” explained Hill. “Then there will be chairs there, and it will be wider. The boardwalk will end before the condos start.”

As currently envisioned, the new boardwalk will connect to, and complement, the existing boardwalk and be more accessible.

“It’ll balloon out a bit, like a wider portion of the boardwalk,” said Hill. “And it will have a pitch that will be [Americans With Disabilities Act] compliant so everyone can get up there.”

A small gazebo is also under consideration, however it would be up to the state whether that would be allowed. Some officials had inquired about installing some playground equipment near the beach, but the DEP rejected that option.

Toms River still needs to complete some administrative paperwork with Ocean County and receive a final determination from the DEP as to what will be allowed on the former Surf Club property. Then, funding must be identified and bids prepared before work can begin. Given the number of steps in the process, there is not yet a formal timeline for when work might be completed.