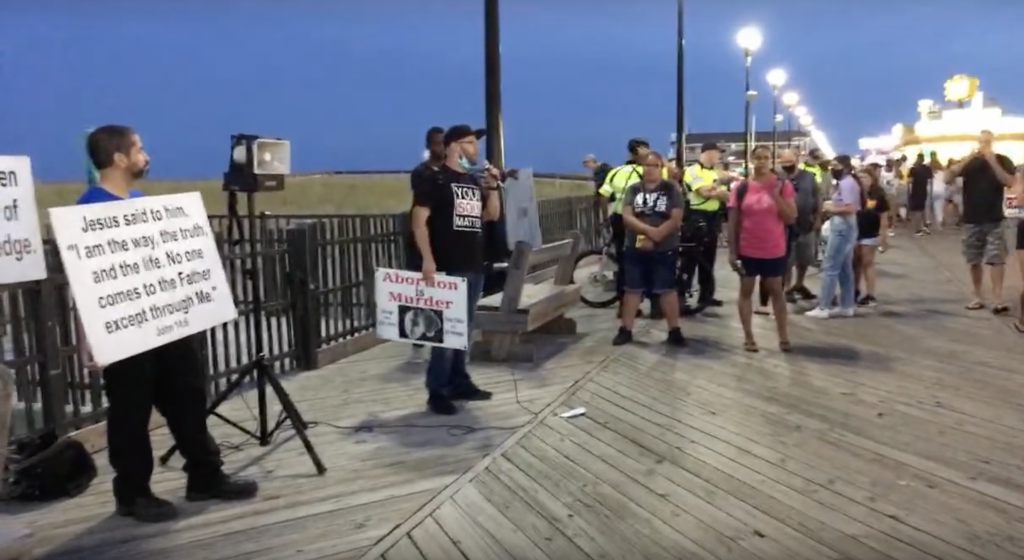 A group of religious activists demonstrate on the boardwalk in Seaside Heights, N.J. (Credit: Time to Change/YouTube)

Religious preachers have proliferated on the Seaside Heights boardwalk this summer, causing concern among some business owners, visitors and officials after several were captured on video using incendiary language and shouting provocative and homophobic messages at the public.

The so-called “boardwalk preachers” have shown up in Seaside Heights in years past, however many have noticed more this year. They often shout fire-and-brimstone sermons, warn visitors that they may be going to hell, and have even set up outside of at least one bar and seemingly taunted patrons. Making matters worse, several have been using loud amplification that has created a nuisance scenario along the ocean.

Officials have been cautious in their approach since freedom of speech and religion are both constitutionally protected. But recent incidents have prompted the borough to hire a constitutional law attorney to look into the matter. A copy of a video viewed by a Shorebeat reporter shows one preacher outside a boardwalk bar and grill loudly shouting anti-gay slurs at passersby. He then proceeds to taunt bar patrons, leading the owner of the business to become concerned about a situation that could boil over.


“People think the mayor and council don’t care,” said Mayor Anthony Vaz. “But we do – our cops do. It’s just terrible nobody has been able to do anything about it.”

Vaz said officials were advised against passing prohibitions or having police ask the preachers to leave the boardwalk area without clear guidance from an attorney who specializes in constitutional issues. While speech and religious fervor is protected, town leaders have become increasingly concerned over the loudness from the amplified speakers the preachers carry as well as the more provocative tactics employed to relay their message. But telling someone they cannot stand on a boardwalk and shout can come with legal consequences, the borough attorney said at a council meeting Wednesday.

“Generally, if other people are allowed to stand still, they have that same right,” said Borough Attorney Jean Cipriani. “In terms of amplification, the issue has always been that they may be able to challenge that policy. The borough has to be very careful on this issue because these groups tend to be very litigious.”

(Note: The videos below are from previous seasons for the purposes for demonstrating an example.)

A legal specialist has been retained by the borough to look into the issue, Vaz said, and will make recommendations after research is conducted and the specific incidents in Seaside Heights are better understood. In the mean time, officials are worried that some visitors may believe the town is endorsing or explicitly inviting the boardwalk preachers.

“It’s very frustrating because the bureaucracy says we can’t much about it,” said Vaz.

The preachers have primarily focused on anti-gay messaging as well as on the sinfulness of adultery and how it may lead people to an eternity in hell. The preachers come in groups that sometimes hold “Abortion is Murder” signs and occasionally are illustrated with graphic photos of abortion procedures. Councilman Michael Carbone, who also owns the Beachcomber Bar and Grill, said a recent incident that included the use of numerous anti-gay slurs became heated.

“They were causing an unsafe situation and I was afraid we were going to have a confrontation,” he said. “People were getting ready to throw bottles and things like that.”

Carbone recorded a video that will be reviewed by the attorney. The primary concern remains the safety of visitors, officials said.

“The borough does not have any position on the content of what people say unless it creates a harassing environment,” said Cipriani.

A Shorebeat reporter visited the boardwalk Wednesday night, after the council meeting, however there were no preachers present on the boardwalk who could comment on the matter.