In Seaside Heights, A New Landmark Building Rises Over the Bay 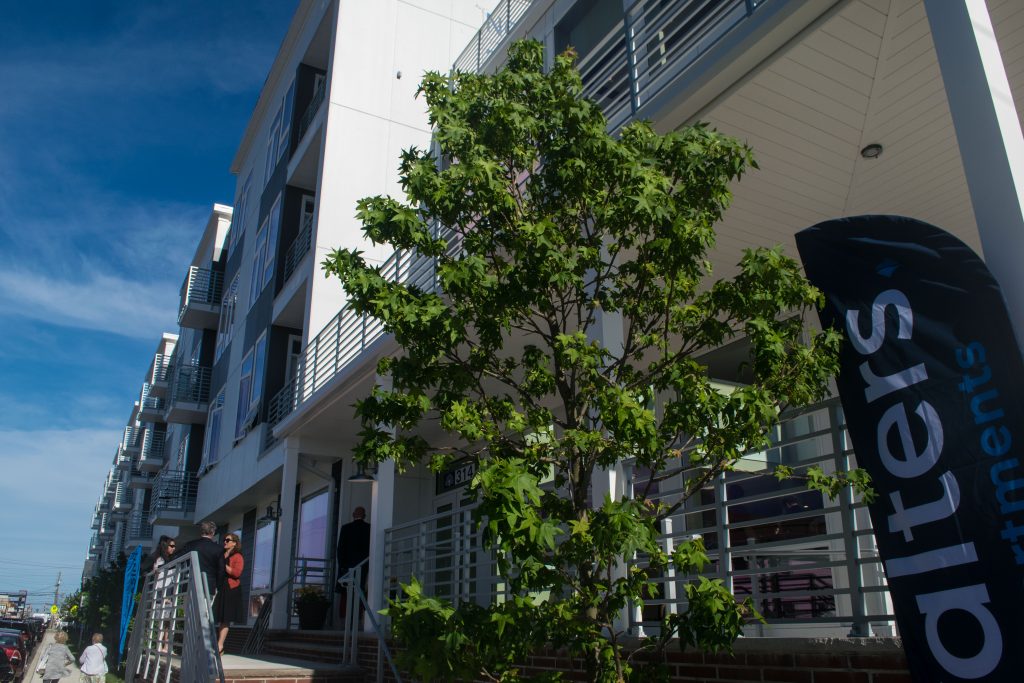 Visitors arriving in Seaside Heights for the first time this season have been noticing something new – and beautiful.

The largest building in the borough is now complete, and is being called a win-win for the state, the town and its residents. The 91-unit Cornerstone at Seaside Heights apartment complex, with its ultra-modern exterior, distinct lighting and bright colors, is turning heads. What was once a troubled motel – the subject of seemingly constant calls for police – and an adjacent lumber yard has given way to a place locals are proud to have in their town. 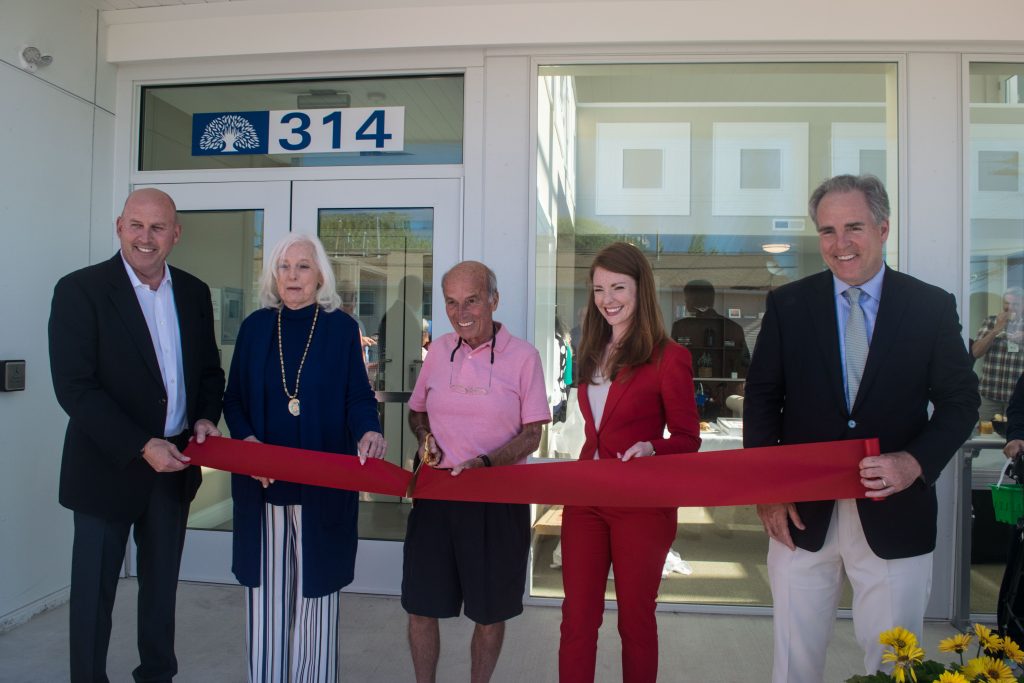 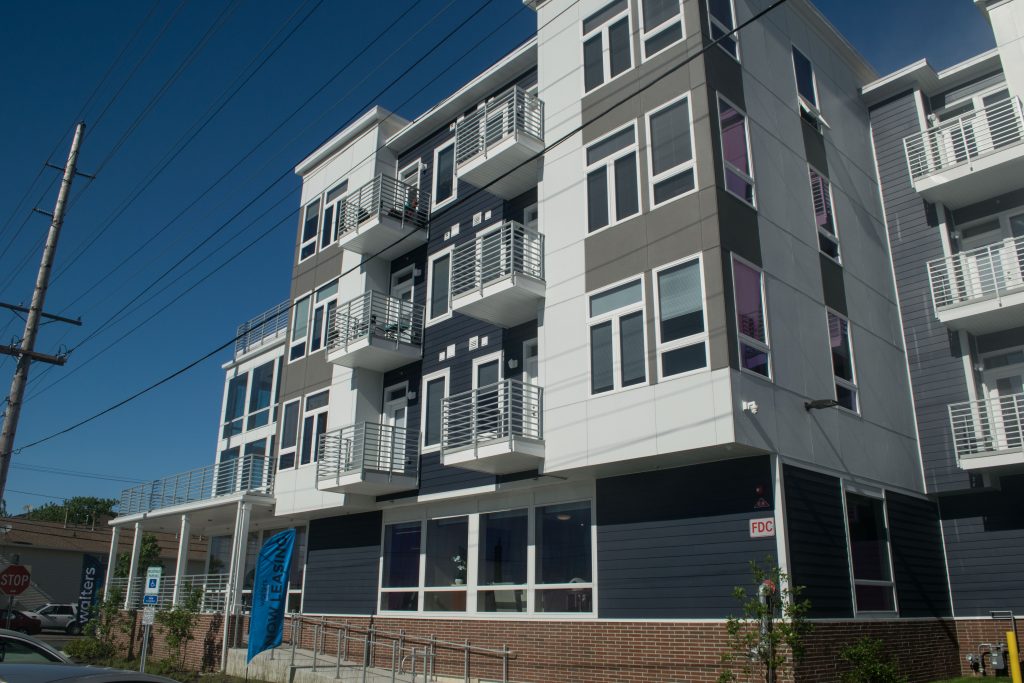 The complex, built by Walters Group of Barnegat Township, is a unique senior living community that was envisioned as a rare, affordable housing opportunity on the barrier island. With the help of federal post-Sandy financing, Cornerstone was completed over the winter and recently welcomed its first residents. This week, officials performed a ceremonial ribbon-cutting while bagpipers performed from a second-floor deck.

“When it started a couple years ago and we put two pieces of property together, we envisioned something pretty but we didn’t expect it to be this incredibly nice,” said Mike Loundy, Director of Community Improvements for Seaside Heights.

The borough, in one of the first steps toward the ultimate goal of transforming its image to that of a family-friendly resort, condemned the former Travel Inn property, the blighted remnant of a once-popular hotel, and partnered with Walters Group to develop the senior community that is now the first thing people see when crossing the bridge. At the same time, the owner of the Seaside Lumber store was ready to retire, providing the opportunity to build something that would make a splash in one of America’s most famous beach towns.

“It was dilapidated, there was no maintenance and a lot of police issues,” said Mayor Anthony Vaz. “Now when people come over the bridge and see it lit up, they see something beautiful. It’s magnificent – first class.”

Federal aid from the Superstorm Sandy relief package often came under fire for how it was utilized – most notably on a number of projects far removed from the coast – but officials say the Seaside Heights project is arguably the best use of such funding statewide.

“The challenge about building affordable housing on a barrier island is that the land values are so high,” said Ed Walters, one of the principals of Walters Group. “Most other developers would have walked away, but there was something about building this building at this location – especially after Sandy clobbered this neighborhood – it was about doing the right thing.” 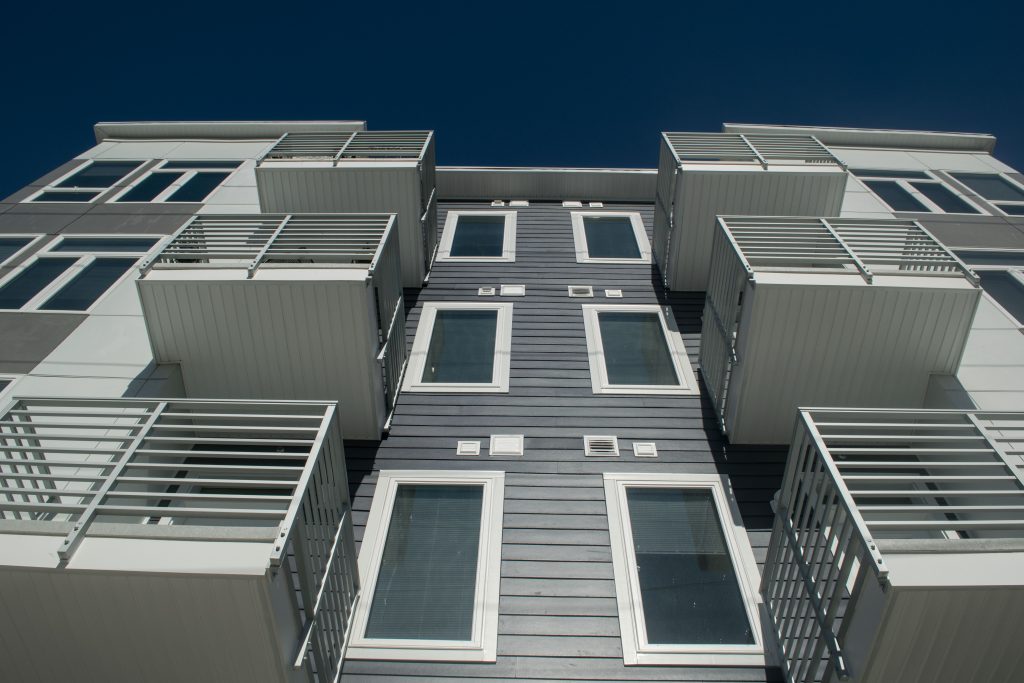 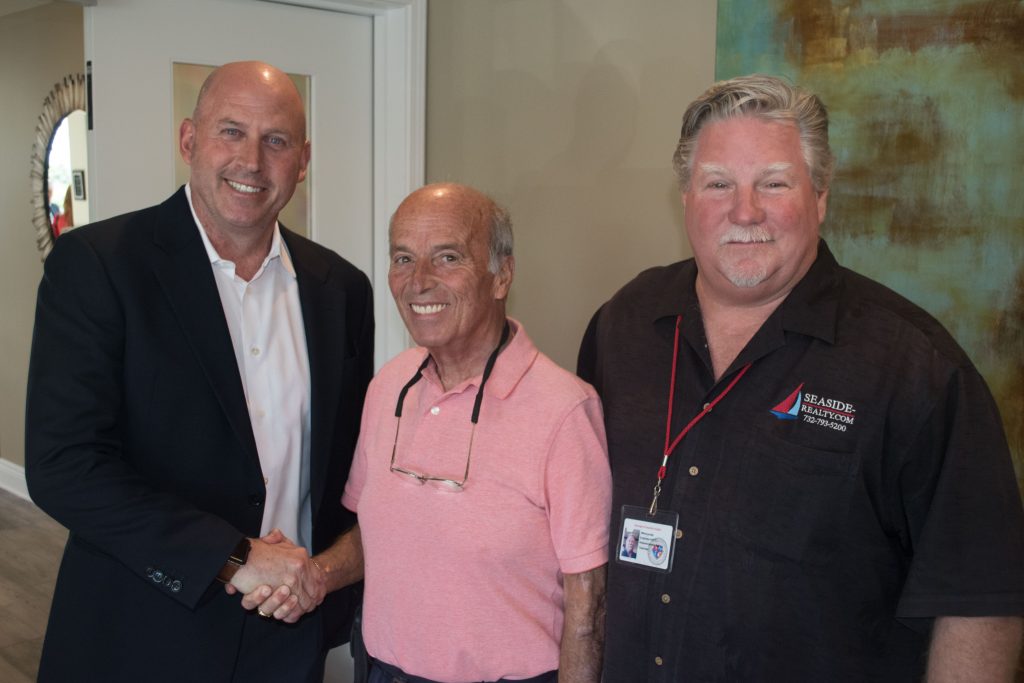 Loundy said thus far, about a third of all the building’s residents are Sandy victims, and that pace is likely to continue as the remainder of the building’s 91 units are occupied.

“We were thrilled about how many Seaside Heights residents affected by Sandy were able to move in here,” Loundy said.

Residents enjoy high-end interior finishes such as granite cabinets with backsplash, ceramic tile baths, resilient plank flooring in the kitchen, and blinds in each unit. Some of the units have balconies overlooking Barnegat Bay, and light-filled common areas dot the entire complex, connecting a variety of spaces such as the fitness center, club room, and vaulted lobby. 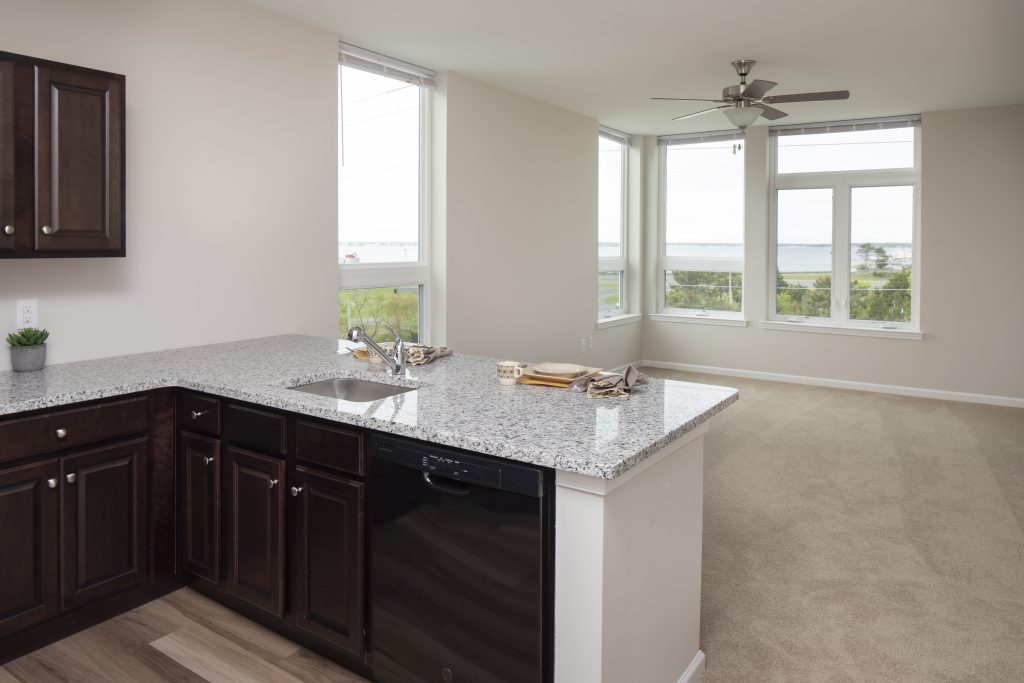 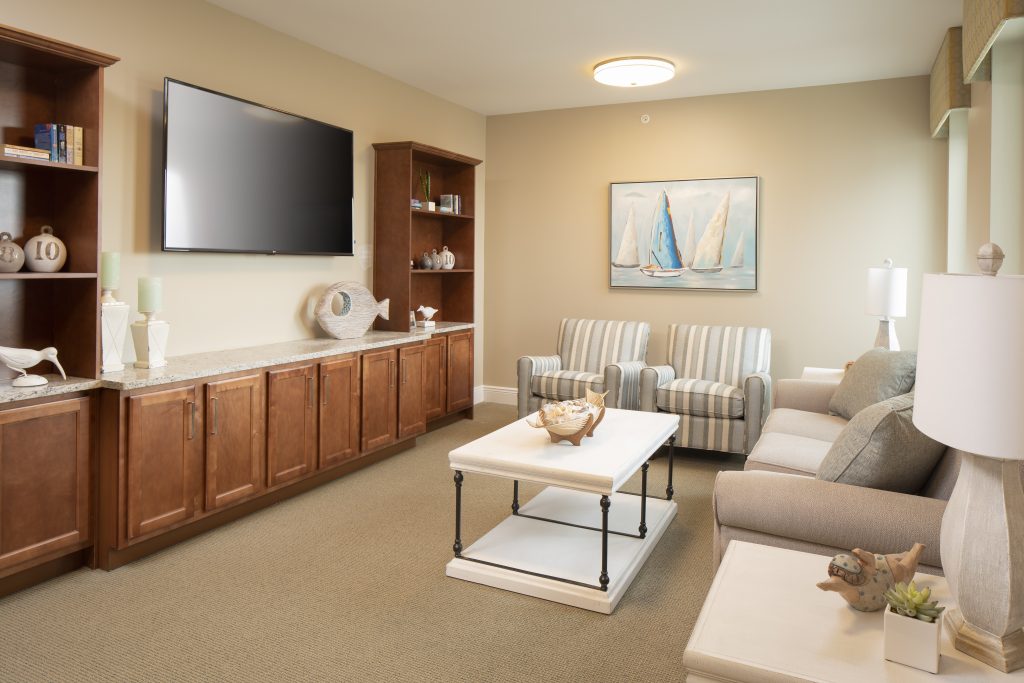 The most striking aspect to most who pass by Cornerstone is its unique exterior design.

“The completion of Cornerstone At Seaside Heights is important because it not only increases access to affordable, high-quality housing and services for seniors, but it is also continuing the revitalization of Seaside Heights,” said Joseph Del Duca, partner and director of affordable housing for Walters.

Apartments are available with prices ranging from $995 for one bedroom and $1,250 for two bedrooms. All of the units are age and income-restricted.

The project was “tight” financially for Walters, even with Sandy aid financing, and there were some bumps along the way – literally. Construction crews, at one point, discovered that the foundation of an old hotel was still intact underground, leading to weeks’ worth of demolition work. But the goal of having Cornerstone ready in time for the summer season was ultimately realized. 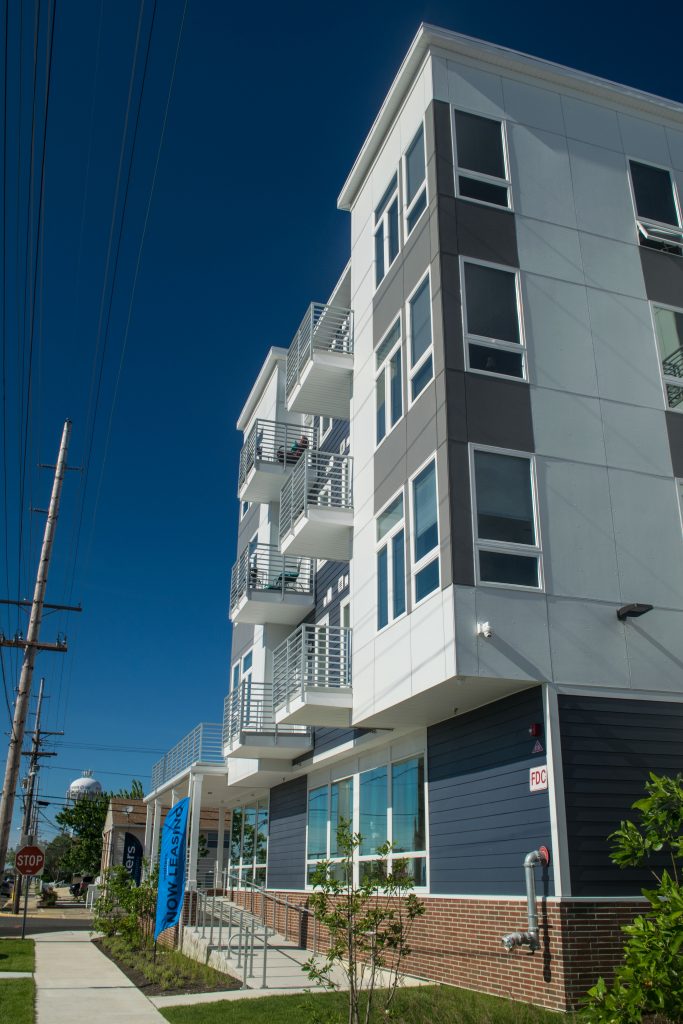 “When I come over the bridge, I feel very proud,” said Walters. “One of our residents told me it was her lifelong dream to live in a place like this, and that made me feel so great, and so thankful we were able to get this property here.”

An open house event will be held this Saturday. Those interested in taking a tour can visit the Cornerstone website for details.