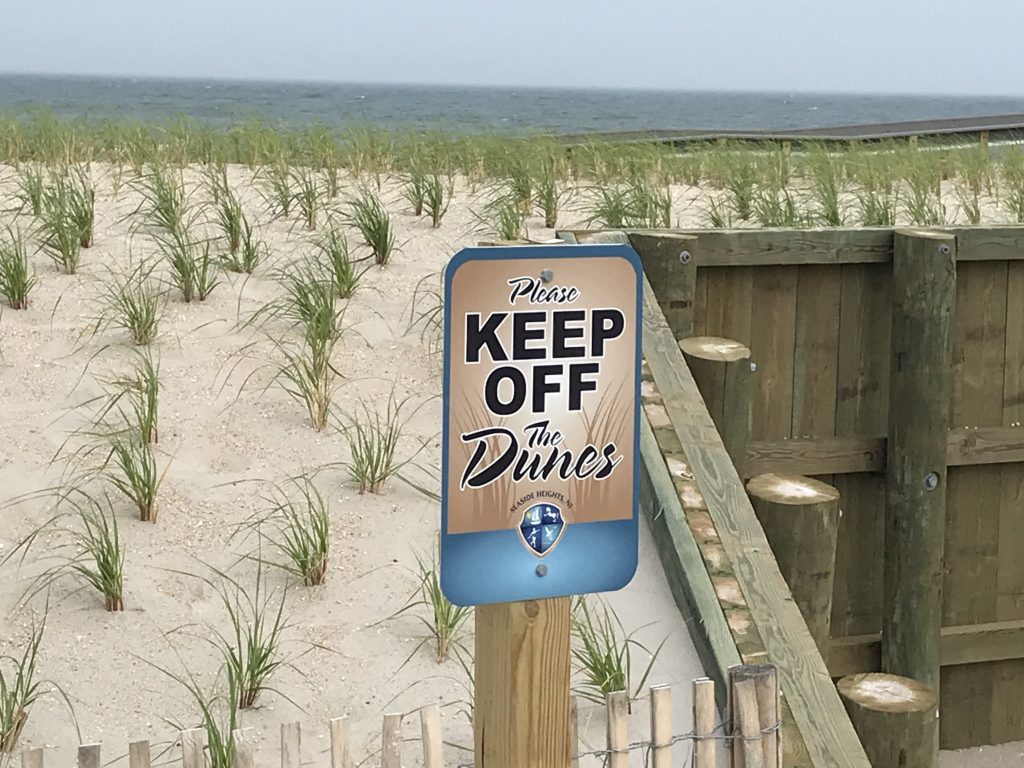 A dune system is only as good as its roots, and experts say the complex system of dune grass and native flora that anchor the protective barriers in place can be rendered less effective if trespassers trod over them on a daily basis.

In its plan for the island-wide replenishment project, engineers even designed angled crossovers – replacing the old cut-throughs – that guarantee paths to the beach are protected from both the front and rear by vegetated dunes. But as the first summer season of larger beaches and towering dunes gets underway, towns are rushing to get the word out that trespassing is illegal.

Officials in both Lavallette and Seaside Heights discussed the matter this week, with the latter introducing an ordinance that explicitly bans dune access.


“Basically, we never had one before,” explained Seaside Heights Borough Administrator Christopher Vaz, whose town was previously devoid of dunes.

Lavallette already has an ordinance in place, but has seen an uptick in trespassing in recent weeks as the weather has gotten warmer and the borough received its first taste of summer during Memorial Day weekend.

“We’ve been putting up the signs about staying off the dunes,” said Councilman Michael Stogdill. “Believe it or not, you see footprints heading up into the dunes, and I don’t know why anyone would do that, signs or not.”

Seaside Heights has also begun placing its ‘no trespassing’ signs in place, though officials there believe the borough’s boardwalk fencing, snow fencing on the other side and quick-growing dune grass will help dissuade would-be introducers from traipsing on the sacred ground.

“We had some problems early on, and some of the business owners were calling me about it,” said Vaz. “Now we have people up there monitoring pretty much 24 hours a day.”

The borough has also installed two mobile video surveillance cameras as part of a pilot program that provide 360-degree coverage of the south beaches, meaning a trespasser can be spotted and either told to leave or face a summons.

Though dunes can hold back raging ocean waves and protect boardwalks, businesses and homes, the system itself is still relatively fragile and is susceptible to damage if beachgoers ignore the warnings. Back in 2014, as Island Beach State Park’s dunes were recovering from Superstorm Sandy, park officials stressed the important of leaving them be in a statement to the press.

“Any foot traffic will impact a dune, any traffic,” officials said. “Each foot print will destabilize the sand and cause erosion, one step will destroy a dune grass plant or break a vital rhizome which knit the dune and stabilize the structure.”