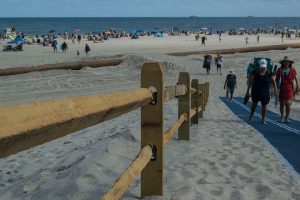 Even with many rainy weekends and closed portions from the dredging/dune project, Ortley Beach slightly increased its beach revenue from last year.

The increase in revenue is less than a $100, but comes in spite of the wet season and weeks of partial closures of several blocks of beachfront from the ongoing U.S. Army Corps of Engineers dune and beach widening project.

The ACE project will create 125 foot wider beaches and protective dunes across the barrier island.

“I believe with the greatly expanded beach that we now have, we will see even more beachgoers next year along with the resulting revenue,” Tate said.

The sale of beach badges was up slightly:

As the dredging project closed beaches in intervals as it moved up and down the coast, Toms River entered reciprocal agreements this year with neighboring communities’ private beach badges, meaning those who held those badges could enjoy the public beaches, and vice versa.

The township also embarked on a public information campaign with updates on social media, its website and in press releases to let beachgoers know about closures taking place.

“I do think we would have done much better but the ACE project did necessitate the closing of portions of our beach at different times,” he said.