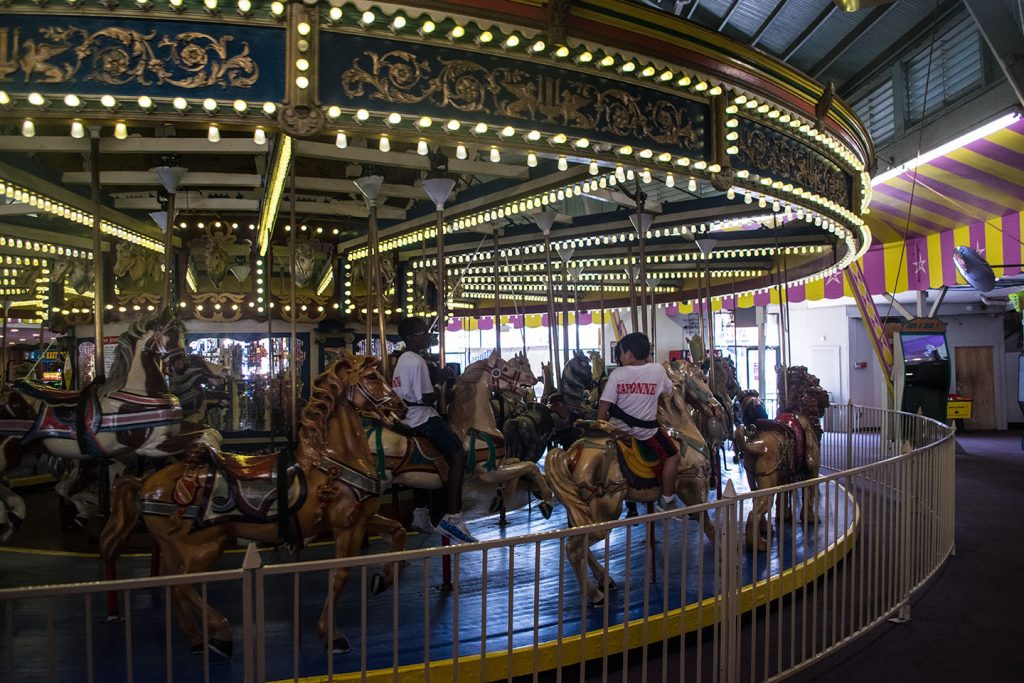 A group of youngsters from Bayonne shuffled around the Casino Pier arcade Wednesday afternoon, playing video games, trying their hands at the crane game and hoping to score an elusive lucky skee-ball shot. But most were spending time on the carousel, built in 1910 and located on the boardwalk since 1932.

Two weeks ago, an appellate court ruled that Seaside Heights’ municipal ownership of the historic merry-go-round is legal. The borough, after hearing Casino Pier would likely dismantle the carousel and sell its parts, hatched a deal with the Storino family – the pier’s owner – to acquire the carousel and a prime oceanfront plot of land in exchange for allowing the pier to be expanded north over the beach. Seaside Heights was given three years to find a new home for the carousel, and with about 18 months to go before the deadline, officials are considering their options – which range from a small museum to a large venue for gatherings and events on the land they acquired as part of the trade with Casino Pier.

“Our first option is to make it a historical site, with things from the birth of Seaside Heights to Superstorm Sandy,” said Mayor Anthony Vaz, adding the borough would apply for grants to build a structure that could house the carousel, which has the potential to become a historic landmark.


Seaside Heights continues to face revenue shortages since its tax base has yet to fully recover from Sany. For the third year in a row, the borough has requested aid from the state to maintain public services, so the prospect of building structures and developing the plot of land may be out of reach.

Ironically, the second option is larger in scope, and would require state approval, but could prove to be a revenue-generator for the town.

“We might want to see a wedding reception hall, for example,” along with the carousel attraction, Vaz said.

Under that scenario, the borough would likely lease the land to a private owner under a long-term lease. Seaside Heights would act as a landlord and collect rent from the developer, who would be required to leave the carousel open to the public, while the developer would construct the building using their own funds and generate revenue from services they could offer.

“The benefits would be twofold,” said Vaz, insomuch as the carousel would be saved and open to the public while the borough could generate revenue and avoid the cost of constructing a building.

“For us to do it, we would need to house an operation that will draw people and draw revenue,” said Vaz.

As the borough considers its options, the most immediate planning surrounds the deadline. The borough may build a simple structure to protect the carousel from the elements in the mean time.

“As long as we get it on to that property, we’re fulfilling the agreement,” said Vaz.