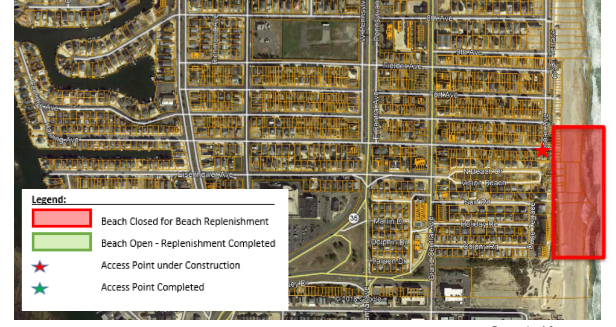 The private beach associations in Toms River can now use the municipal beaches, thanks to a reciprocal agreement passed ahead of a large-scale dredging project that will at times close beaches.

Condo and private beach associations who have their own beach badges for their private beaches will be allowed to use those badges on the township’s public beaches, such as Ortley Beach.

Township council approved this agreement at its meeting June 26. Councilwoman Maria Maruca mentioned the reciprocal agreement at the July 17 council meeting as she ran down the schedule of dune building, beach widening and dredging work scheduled for most of the barrier island — which will close portions of the beach.


She said the federal crews will not close entire stretches, only portions as they move through the project area. Crews are now in the Ortley Beach area, and the township is awaiting a firm schedule for the Northern Beaches area of Toms River.

During times when private beaches are closed from the project, their badges will be accepted at township beaches.

“The township council is of the opinion that it would be in the best interest in the township of Toms River to permit recognition of beach badges issued by private-beach associations for use of Township-owned beaches, when an association beach is closed for replenishment and dune construction,” reads the resolution.

On July 20, the township provided the federal project update that the Vision Beach beachfront, as well as Eisenhower, Harding and Coolidge beachfronts were closed for the project.

Dredging in approved borrow areas will grab 11 million cubic yards of sand, pumped via pipes onto the beaches. Those dredge materials will be built into dunes and a berm system.

The intention, according to the ACE, is “to reduce potential damages to infrastructure, businesses, and homes that can occur from coastal storm events.”

Township Engineer Rob Chankalian has posted regular updates with maps and photos of the work in Toms River on the township website at http://tomsrivertownship.com/index.php/194-news/latest-news