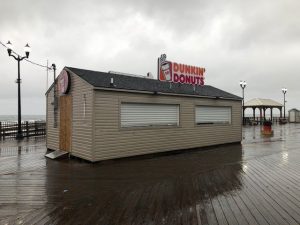 The Dunkin’ Donuts kiosk at boardwalk and Hamilton is closed after defaulting on its lease. (Photo courtesy Seaside Heights Borough)

Want to operate a breakfast spot on the boardwalk? Seaside Heights is accepting bids to operate the spot at Hamilton and Boardwalk, at the center promenade where there is a Dunkin’ Donuts.

That Dunkin’ has defaulted on its lease, said borough officials last month, and its remains closed. Seaside Heights would like to find another operator for the site, and as such began the bid period April 2.

The borough will accept bids for a five-year license to operate a retail breakfast food and beverage concession at the Hamilton Avenue spot, a free-standing building that is municipally owned.

If you have the thought of turning the doughnut chain’s stand into a sub sandwich or ice cream concessionaire, you’d be rejected, as the bid specs outline the allowed menu items and retail activities, defining them to breakfast foods.

“The concession shall be operated solely for the purpose of serving breakfast-style food and beverages. The quality of the food and beverages, its preparation and service, and surroundings shall be first class,” according to the borough document. No vending machines, stools, tables, chairs or other seating will be permitted.

The borough also defined what foods are specifically not to be sold there: ice cream, water ice, pizza, hot dogs, hamburgers, chicken, fish, steak, gyros, French fries, sausage or steak or other meat sandwiches, or “any other type of lunch and dinner foods.”

The concessionaire must be open, at minimum, each day from the Saturday before Memorial Day through Labor Day from 11 a.m. to 10 p.m., and also be open weekends in September.

The bid period began April 2 and will be open until 1 p.m. April 17, when all the sealed bids will be opened. The borough has 60 days from there to accept or reject the bids.

Borough Administrator Christopher Vaz said the lessee of the kiosk-style building near Hamilton Avenue defaulted on the lease, necessitating the re-bidding process. The tenant and Dunkin’ Donuts are, themselves, in litigation, he said.

There’s also a Dunkin’ on the north end of the boardwalk, outside Casino Pier, as well as one in Lavallette on Route 35 North.