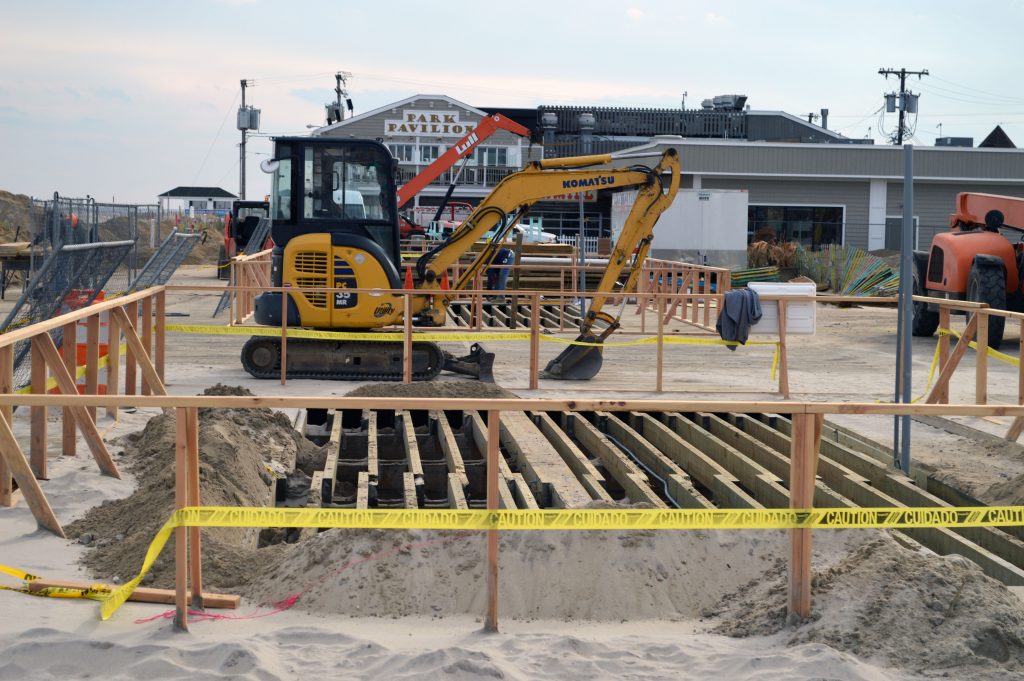 When completed, the north end of the Seaside Park boardwalk, near the border with Seaside Heights, will be filled with eateries and small shops and – if borough officials approve – an expanded tiki bar on the sand.

DJ D’Onofrio, who owns the Sawmill Cafe and numerous lots north of the restaurant on the boardwalk, said he is planning four “pavilions” on either side of the boardwalk and three kiosks in the middle of the boardwalk on his property, which encompasses both sides of the boardwalk where the two towns meet. The commercial buildings in this area were destroyed in the 2013 boardwalk fire.

D’Onofrio said the project, under construction now, will make the transition from Seaside Heights to Seaside Park appear more seamless and aesthetically pleasing than before, with more air flowing through. The three pavilions are being constructed in the middle of the boardwalk while the reinforced kiosk buildings have already taken shape on either side. D’Onofrio said the buildings should be ready this summer.


“I really would like to see everyone talking about [certificates of occupancy] the first week in May,” he told the Seaside Park borough council during an informal presentation at Thursday’s council meeting. “Time wise, we’re a little behind, but the weather is really working with us now.”

One of the pavilion buildings will be a bathroom which D’Onofrio said will be open later in the season that the town’s own bathrooms. While not every space has been leased, most are being taken by restaurant owners. The vision for the entire area is one with a diverse array of eateries, similar to the south end of the Asbury Park boardwalk, D’Onofrio said. 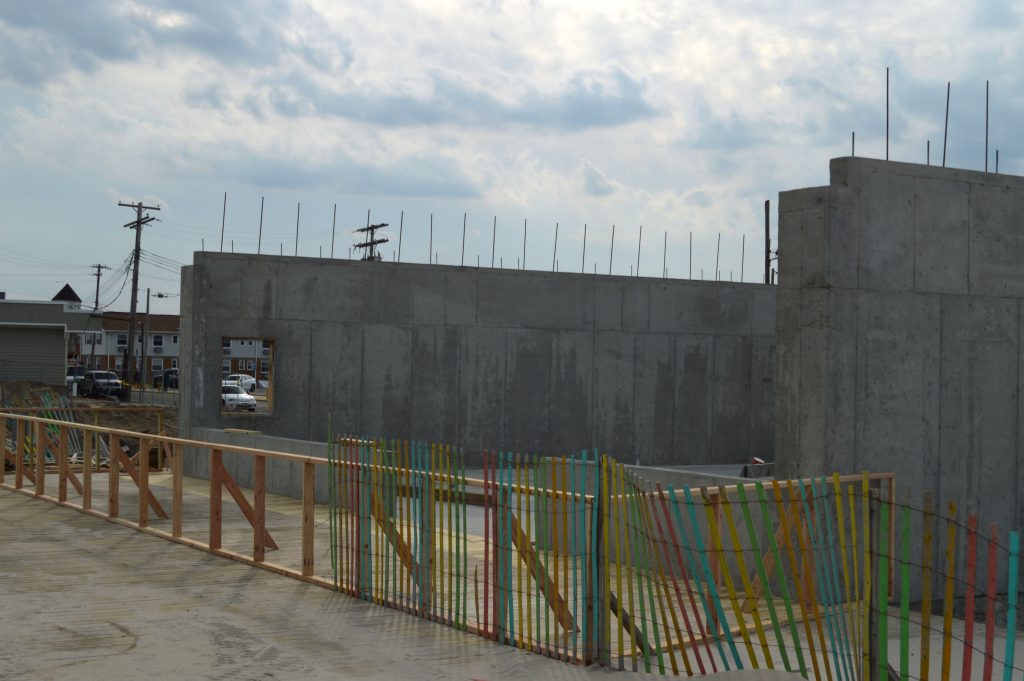 So far, the owner of Park Seafood has leased a space, and D’Onofrio’s own daughter will be starting a coffee shop in another. There will also be a healthy fruit restaurant and Kohr’s ice cream is planning a space as well. The Silver Apple will also return to the boardwalk in one of the spaces, D’Onofrio said.

D’Onofrio, at a later date, is also planning to request daily operation of an outdoor tiki bar on the sand across from the Sawmill. Last year, the borough gave him permission to operate the tiki bar on a trial basis on Memorial Day weekend, July 4 and Labor Day weekend, and this year he’d like to open daily. 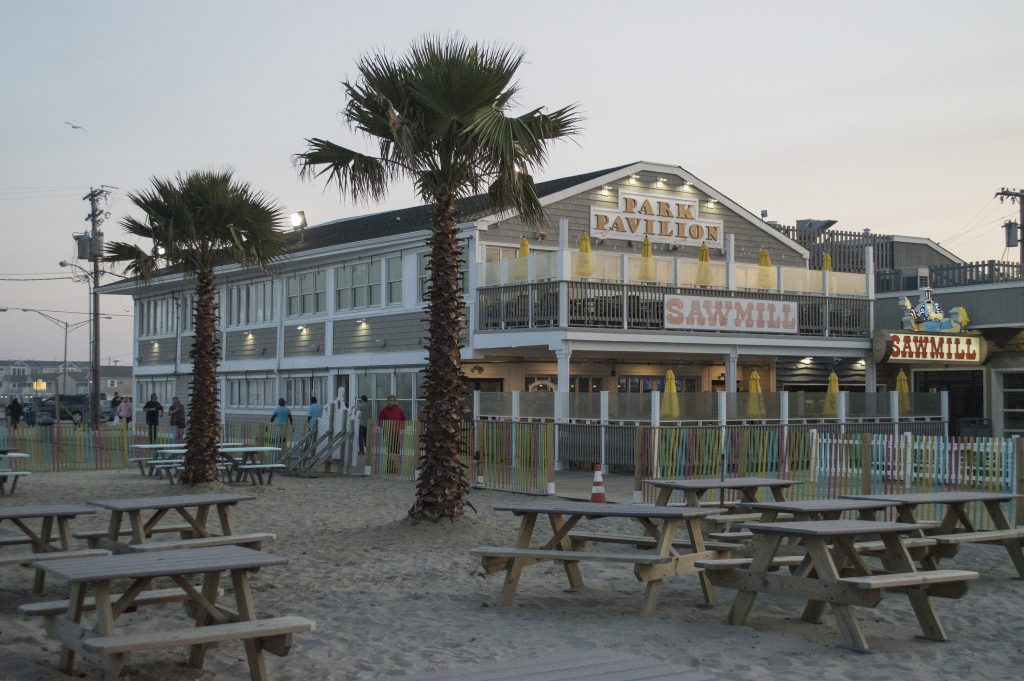 What was a small, mobile bar would become a decorated tiki bar with frozen drinks and restricted access – no one will be allowed to walk in between the tiki bar and Sawmill with drinks – which would be open during the daytime and evening hours. D’Onofrio expects to ask the borough to allow him to operate from 4 p.m. to 10 p.m. on weekdays and 12 noon to 10 p.m. on weekends.

“It wouldn’t be a late night operation, but something for people coming on and off the beach, and coming in from the boardwalk,” D’Onofrio said, adding that his operation of the tiki bar last year did not cause any notable problems.

Borough council members said they would take up the tiki bar issue when D’Onofrio’s license comes for an annual renewal in the spring. They also indicated they would confirm with the police department that the operation of the tiki bar didn’t cause any issues last season.

Overall, D’Onofrio said, his vision for his slice of boardwalk is one that is more aesthetically pleasing and family-friendly, a plan that coincides with Seaside Heights’ continued push to make their town more family-oriented. The new buildings, built to withstand pounding from 10-foot waves, will improve the look of the area from the former boardwalk booths, he said, and will not be as cavernous as the pre-fire setup.

“I told the town two and a half years ago I wanted to do something different, trying something more family-oriented,” D’Onofrio said. “I think what we’re putting up there will be pleasant, attract good people and be less ‘carney..'”

“This boardwalk is part of my childhood, part of my memories and part of my children’s memories,” said Seaside Park Councilwoman Faith Ligouri. “I’m just thrilled to see work is being done. It looks like it’s really, nicely laid out.”

D’Onofrio said he is unaware of any plans by his neighbor, Bill Major, the owner of the former Funtown Pier site, to develop his portion of the boardwalk or rebuild the pier. Last year, Major said he may decide against rebuilding since the borough indicated in its master plan that ride heights should be limited to 150 feet, eliminating “thrill” style rides as a possibility.

Finally, D’Onofrio said he will ensure the boardwalk is of full length near the Heights-Park border, even though that property is not owned by him.

“Come hell or high water, it’s going to get done,” he said.

The seven buildings will serve as a starting point for more development by other property owners, D’Onofrio believes.

“It has to grow organically at this point,” he said.