Large ‘Phytoplankton’ Bloom off N.J. Can Be Seen From Space: Here’s Where it Came From 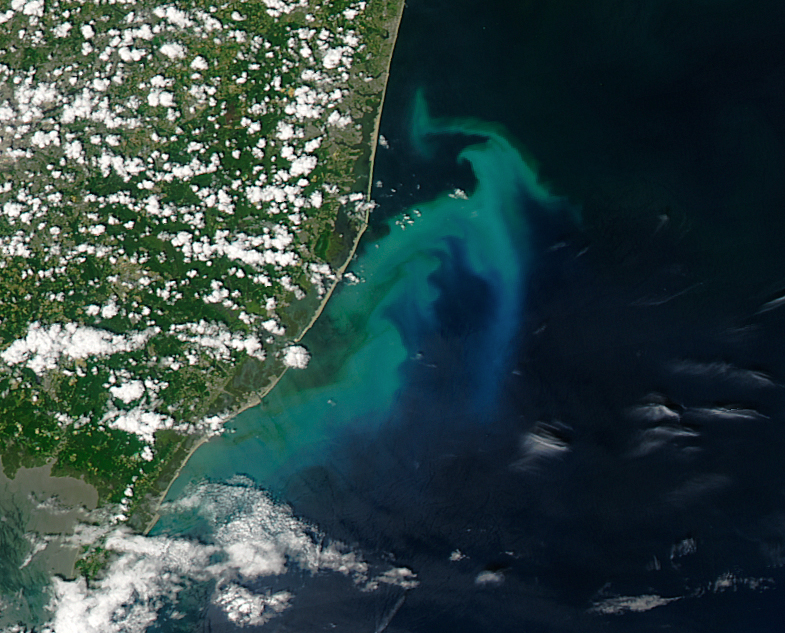 A phytoplankton bloom off N.J., captured from a NASA satellite. (Photo: NASA)

A large bloom of phytoplankton – microscopic plant organisms – was spotted from space by a NASA satellite recently off the New Jersey coast, but unlike a recent bloom in Florida, it is likely the Jersey bloom occurred naturally.

The bloom was captured on camera July 6 by the Moderate Resolution Imaging Spectroradiometer (MODIS) on NASA’s Aquasatellite. The satellite’s camera acquired the natural-color image of the large phytoplankton bloom.

According to a press release from the space agency, nutrients to fuel a bloom can be carried to coastal waters from inland pollution sources, such agricultural runoff. That phenomenon was apparent in a recent bloom off the coast of Florida, NASA said, but isn’t as likely to be the cause of the New Jersey bloom. Pollution-fed blooms can occur in Mid-Atlantic States as well, but blooms here can also be fueled by upwelling.


When winds blow surface waters away from the coast, deeper, cooler, and often nutrient-rich waters will well up from the depths to fill the gap, NASA officials said.

According to Oscar Schofield, a marine scientist at Rutgers University, the wind-driven upwelling is reflected in relatively cold water temperatures off the Jersey shore.

“These upwellings occur every summer, and fuel large phytoplankton blooms,” he said. “Studies have suggested these summer upwelling events occur several times each summer and lead to large blooms that can discolor the water.”

Phytoplankton blooms are often harmless, and are an important food source for marine life, the NASA statement said. Other times, blooms can be harmful, as they can deplete the water’s oxygen and suffocate marine life, and produce toxins that can be harmful to both aquatic creatures and humans.