Keeper striped bass moved into the area this week in larger numbers than previously seen this spring, and nowhere else was than better proven than at the Barnegat Inlet jetty… 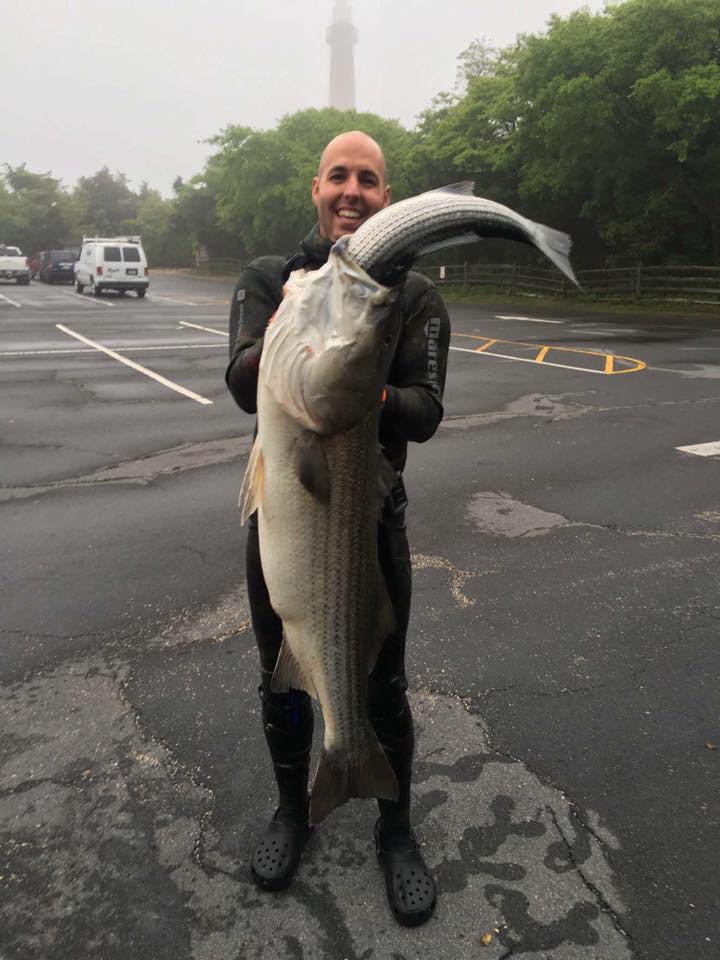 Keeper striped bass moved into the area this week in larger numbers than previously seen this spring, and nowhere else was than better proven than at the Barnegat Inlet jetty, where angler Dan Street hooked a 40-pound, 48.5-inch cow.

The catch, caught on the LBI side of the inlet and weighed in at Surf City Bait and Tackle, will also likely come to be known as the coolest catch photo of the season. Street’s fish was pictured with another keeper bass – a “tiny” 29.5-incher – in its mouth. No, it’s not a Photoshop, though it’s clear the photo was set up to show the enormity of the bigger bass.

Congratulations, Dan, on two great catches to start off your season!


This side of the inlet, bass were also bending rods this week.

“Keeper bass and large blues continue to be taken by shore bound anglers both with bait and artificial lures,” said John from The Dock Outfitters in Seaside Heights. “Cut bunker and clams remains the go to baits, while poppers, swimmers and metals are the lures of choice.”

Crabbing is also starting to pick up at the shop’s free fishing pier on Barnegat Bay.

The news on crabbing was seconded by the staff at Murphy’s Hook House in Toms River, where an uptick was also seen this week. Bluefish, which have been on a crazed run in recent weeks, were still being taken in both the bay and the ocean, a report from the shop said.

‘There were some blues around yesterday off the surf and if you moved around you most likely found them,” Mario from the shop said. “The back bay is also producing blues as well.”

The staff at Betty and Nick’s Bait and Tackle in Seaside Park reported good bass action about one to two miles off the beach. Boaters were doing better than surf anglers this week, though that could change at any moment.

“One beach angler came in this morning and said he landed an 18 pounder and there was a big school of bass, birds and bunker right on the beach,” a report from the shop said.

Late in the day Thursday, blues stormed the local beachfront, and anglers using bucktails seemed to do best.

In the bay, fluke were being caught near the inlets and in the middle bay near the 40, BI and BB buoys. I haven’t heard much on the action behind Island Beach State Park as of yet. Boat anglers who don’t want to venture into the ocean should also consider heading into the Manasquan River, where this is one of the best times of year to catch fluke in the main channel just east of the canal near Clark’s Landing, out to the Route 35 bridge.

Farther out, fluke began to appear in the catches of party boat customers. Aboard the Norma K III, a mix of keepers and shorts were boated. Those who used white and green bucktails had the most success, a report from the boat said. The boat, by the way, is now running its customary 7:30 p.m. to 1 a.m. bluefishing trips every night.

As always, we end with our usual request for you to send us your catch photos from the weekend. We’ll be happy to post them with this column, as we love giving some bragging rights to our local anglers. Send them to daniel@shorebeat.com and we’ll make sure they make it to the site.