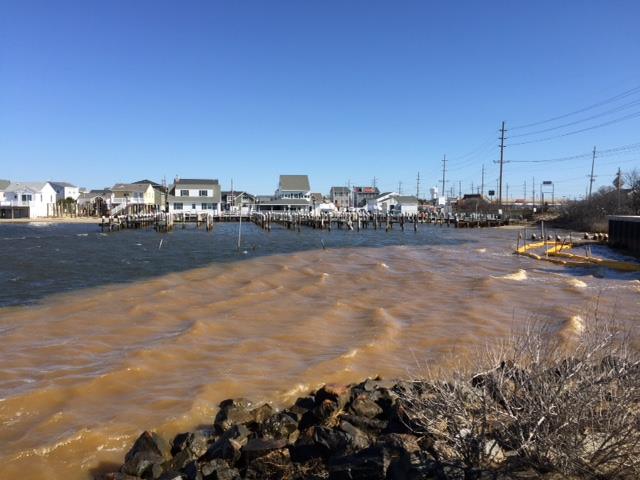 State officials this week announced the next steps in what has been a nearly year-long effort to repair a stormwater pump system that has malfunctioned since the completion of the Route 35 rebuilding project.

The eight pump stations between Mantoloking and Seaside Park, designed to pump stormwater off the highway to reduce flooding, have suffered from water intrusion and have consistently run even in the absence of rain. The flow of water has also led to scour holes developing on the bay floor, most notable in Seaside Park, where silt plumes have developed which have temporarily turned the bay water brown. 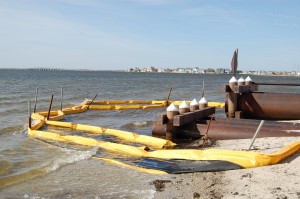 A new silt plume was photographed last week in Seaside Park. After Shorebeat published an article last fall which included video of the pumps activating despite there having been no recent rain, Transportation Commissioner Jamie Fox submitted an editorial highlighting the importance of the pumps, and reiterating that all of the stormwater running through them will be cleaned by mechanical devices in the system before being emptied into the bay.

Save Barnegat Bay, an environmental group that has been critical of the plumes, said their representatives from with both the DEP and DOT officials over the past week, and they apologized for the latest plume.

“Next step is to stop these events from happening in the first place and to establish regular monitoring with transparent reports for the future,” the group said in a statement.

In order to minimize the turbidity, the department is in the process of installing marine mattresses on the bay floor where water outfalls into the bay, the agency said in a statement. Marine mattresses are stones enclosed in netting. The DOT has also filled in the scour holes with clean sand when the marine mattresses were installed, as authorized by the state Department of Environmental Protection. Clean fill sand commonly contains some level of extremely fine clay particulates, the agency said. 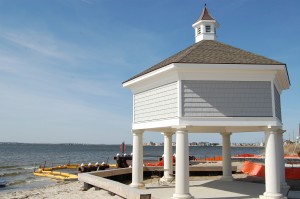 “It is necessary to turn the pumps on this week to remove the water that has accumulated in the system so crews can continue sealing the connections between the pipes and the manhole structures,” the statement said. “NJDOT has been working with the DEP to ensure the work complies with all environmental requirements.”

The water from the outfalls has been tested in the past and no problems have been identified, state and county officials have said. The water will continue to be tested when the pumps are operating. The DEP, in conjunction with the Ocean County Health Department, will be sampling water from the drainage system and from the bay when the outfalls are running.

To date the DOT said it has sealed all the pipes and 50 percent of the manhole-pipe connections. The sealing of the entire system is expected to be completed later in the spring.

Earlier this week, the DOT issued a public notice in newspapers advertising its plans to perform “major technical modifications” to its Coastal Area Facilities Review Act permit and other environmental permits for the repairs. According to the published notice, the DOT plans “minor field positioning and sizing adjustments for Pump Stations 1, 2, and 3 including electrical control gazebos; additional steel sheeting protection for all five pump stations/gazebos; incorporation of ADA compliant handicap ramp access at all five gazebos; modification of existing scour hole protection at Outfall A; incorporation of scour protection and other erosion/sediment controls at Pump Stations 1-5 and Outfall B; and additional landscaping/ornamental treatments at Pump Stations 1-5 and Outfall B.”

In the area of mileposts 9 to 12.5, the permit modification will address the previously completed construction of an overhead electrical transmission line over Scow Ditch at Pump Station 4, and the proposed re-routing of the electrical line under Scow Ditch via directional drilling.