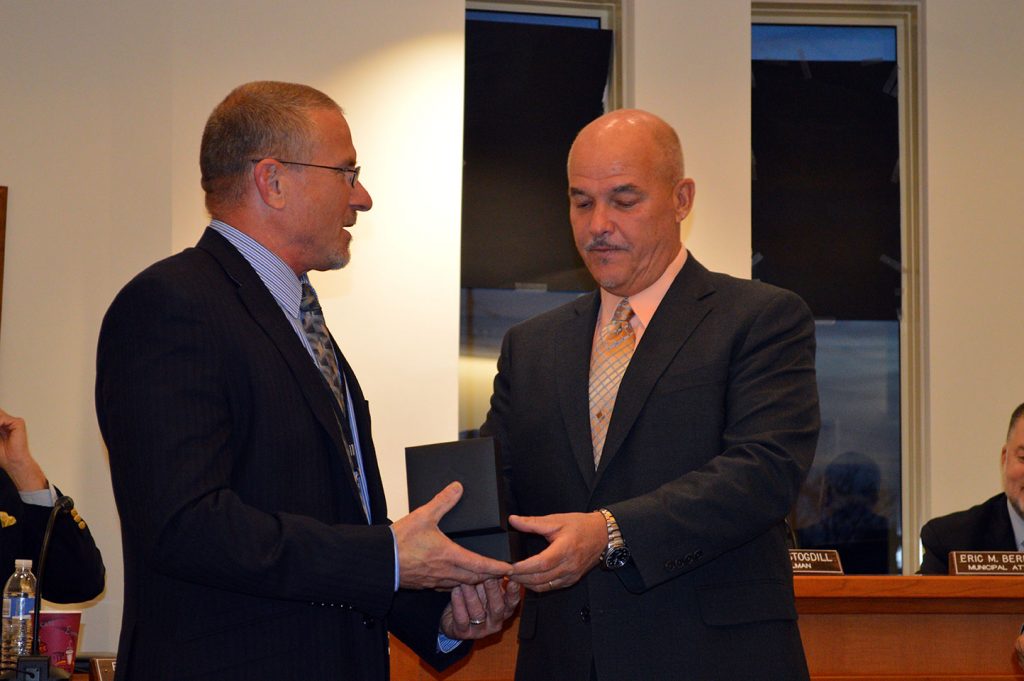 Christopher Parlow has guided Lavallette through the good times and the bad times over his nearly 17 year-long tenure as borough administrator, and was instrumental in handling the borough’s recovery from Superstorm Sandy, officials said Monday night.

The borough council meeting Monday would be the last for Parlow, who is retiring April 30. Joined by his wife in the audience, officials, professionals and residents heaped praise upon the Brick Township resident, who will now have more time to commit to his favorite pastime – fishing.

“I can’t say enough about Mr. Parlow and the work that he’s done for the borough itself – millions of dollars he’s saved the borough,” said Mayor Walter LaCicero, joking that the two became better friends after they were no longer on opposite sides of the negotiating table once LaCicero retired from the borough’s police department. “He taught me what it means to run a multimillion dollar corporation like the Borough of Lavallette. I’m hoping that his replacement can even partially fill the shoes that he’s going to leave here.”


Councilman James G. Borowski served on the committee that searched for the borough’s first administrator in 1999. He said he met Parlow at a meeting of officials from towns that operate their own electric utilities. Parlow was representing Milltown, Middlesex County, at the time.

“He was so helpful, helping a freshman councilman get those answers,” Borowski said, noting how Parlow went out of his way to help a council member of another town.

Parlow applied for the Lavallette job, but was not one of the candidates to be offered a second interview.

“I was able to use my veto power, or whatever you might call it, to insist that we bring him in for an interview,” said Borowski. “You can blame it all on me, Chris.”

Since those days, the two have become good friends, having fished together in their off-time from borough business.

Parlow received specific praise on his leadership in the wake of Sandy, when he was able to adapt quickly and find solutions to myriad storm-related problems. 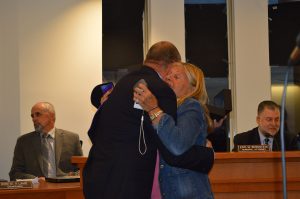 “The rule book on how to run a borough was thrown out the window and you had to start from square one,” said Councilman Robert Lamb. “I was here and watched Mr. Parlow – whether he hitchhiked over here or caught a ride, every day, eating the cheap soup we were all eating from the Red Cross. He knew his job from the old way to run a borough. To watch that every day was really an amazing feat.”

“We deal with a lot of administrators throughout the state, but there are few who have given as much time and service to their communities as you have,” borough attorney Eric Bernstein said, addressing Parlow.

For his part, Parlow said that he enjoyed his job from day one, because no day was ever the same. While his officials job description tasked him with developing budgets and heading departments, the experiences in the day-to-day work went far beyond that.

“When you work in a small town like Lavallette, it involves doing so much more than those core duties,” Parlow said, referencing occasions when he plowed snow and helped assemble water meters at the Public Works Department.

“There are no two days here that are ever the same, and that’s one of the things I live about working in Lavallette and working in a small town,” he said, speaking on why he always chose to stay in Lavallette over pursuing other opportunities in larger communities when they arose over the years.

LaCicero and a tearful Council President Anita Zalom presented Parlow with a watch as a retirement gift, inscribed with a message hoping Parlow will always keep Lavallette in his heart.

“You’re a man of great integrity and great expertise, and we have all benefited from that,” said Councilwoman Joanne Filippone.

Parlow’s replacement has not yet been announced by officials.