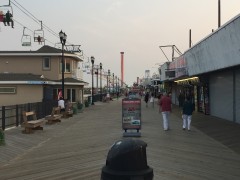 Residents and vacationers in Seaside Heights will be more easily connected to the web than ever before, as borough officials have begun the formal process of approving plans for Wi-Fi networks to be installed on the boardwalk and town-wide.

The networks will be provided by two different companies. Cablevision Systems, the borough’s primary cable provider, is planning to install a network which will overlay nearly the entire town. Its antennas will be installed on utility poles, roofs of borough buildings and other locations, said Borough Administrator Christopher Vaz.

The town-wide network will be free to customers of Cablevision, Comcast, Time Warner and several other cable television providers. It will not cost the borough any money to partner with Cablevision for the network.


The boardwalk will receive a separate Wi-Fi network built by a private company. The borough council this week authorized officials to solicit proposals for the project. Companies have already approached the borough to express interest, Vaz said. The development of the boardwalk network would also come at no cost to the taxpayers, and would be free to anyone to use.

“There’s also the opportunity for advertising money that gets generated by the company,” said Vaz, explaining that an advertising-supported Wi-Fi network could potentially share revenue with the town.