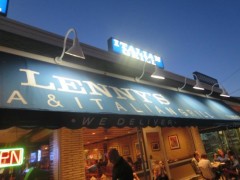 A years-long saga over the liquor license held by Lenny’s Pizza and Italian Grill in Lavallette has effectively come to an end, with the borough council formally approving the license for use, albeit at a new location.

A local favorite, Lenny’s has owned the license for several years but was blocked from utilizing it since a municipal ordinance bans two licensed establishments from operating within 1,500 feet of each other. Lenny’s was within 1,500 of the Crab’s Claw Inn, and attempts by some officials to approve the license were rebuked by others on the council who voted down a measure to modify the ordinance. Though the restaurant’s owners pledged they would not operate a bar – their intent was to serve drinks within the restaurant – some neighbors voiced complaints over the matter.

In November, a lawsuit filed against the borough by Lenny’s was dismissed.


The new license, approved Monday, allows Lenny’s to use its license at 76 Grand Central Avenue, which is located near the intersection of Haddonfield Avenue. The address is currently occupied by a building that was damaged during Superstorm Sandy.

Reached Tuesday, Phil D’Aloisio, one of the owners of Lenny’s, said he preferred to keep his plans for the location private for the time being. He did say, however, that the current Lenny’s location will remain and a new restaurant will open at the approved location.

“We’re very thankful to the council and the people who supported us,” said D’Aloisio.