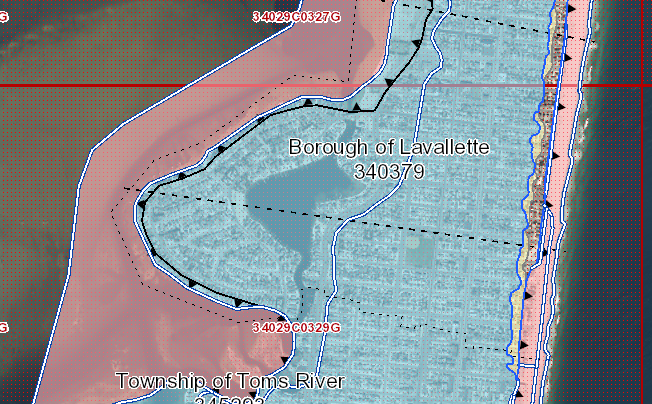 Lavallette this week joined the chorus of numerous Ocean County communities to pass resolutions formally opposing a change in state policy that would require building standards in some ‘A’ flood zone areas to be nearly comparable to those in higher-risk ‘V’ zones.

The decision by the state Department of Community Affairs, which goes into effect March 19, would affect about 100 homes in Lavallette, officials said this week. Those residents in the what is known as the “Coastal A” zone would be required under state codes to build or lift their homes onto piling foundations rather than simply meeting height requirements on a standard block foundation. So-called “V” zones are named as such because they are areas in which structures may experience wave velocity.

Coastal A zones are included in FEMA flood maps, but only as an option for states and local governments to use in flood planning. The standards are a state decision, not a federal decision, officials have said, and will not affect flood insurance rates. Building a home, however, could prove much more expensive.


“The line waves into the ‘A’ zone in certain areas,” said Borough Administrator Christopher Parlow.

The properties affected are mainly on West Point Island and Bay Boulevard near Coleman Lane.

Mayor Walter LaCicero said Lavallette worked hard to have properties removed from the ‘V’ zones after proposed FEMA flood maps were released in 2013, and the change by the state government will essentially re-institute the ‘V’ standards where they are not needed.

“The arguments we put forth were, essentially, futile,” said LaCicero.