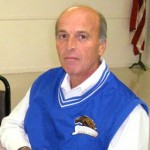 Vaz, then council president, assumed the mayor’s chair in July after the resignation of former Mayor Bill Akers. He has been serving in that role ever since. Vaz was replaced on the council by Michael Carbone.


Incumbent council members Victoria “Penny” Graichen and Harry Smith, who were also running unopposed, received 181 votes and 168 votes, respectively, and were re-elected to the council for three year terms.

Vaz, Carbone and Graichen are all Republicans. No Democrats filed to run this year.

Three candidates running unopposed for the Seaside Heights Board of Education also were elected to terms of varying lengths. Peter James Smith was elected to a full, three-year term on the board, while Andrew Leahy won an unexpired two year term and Raymond Powanda-Carvalho won an unexpired one year term. Smith received 143 votes, Leahy received 140 votes and Powanda-Carvalho received 133 votes.