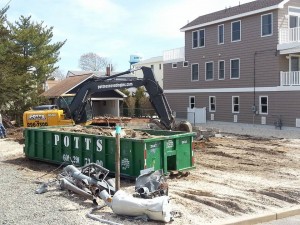 The first round of demolitions of abandoned homes in Lavallette will begin shortly under a federal program being administered by the state, officials there said.

Borough officials have said nine homes will be initially demolished under the program, which the state Department of Environmental Protection will put out to bid in the coming weeks.

“A couple are properties residents have visited us to complain about,” said Borough Administrator Christopher Parlow.


The list of properties could eventually grow, Mayor Walter LaCicero has said. The borough, LaCicero said, provided a list of homes to the DEP after they were considered to be abandoned following damage suffered during Superstorm Sandy in 2012.

“If you see a house with a big number in orange on it, it’s coming down,” said Parlow.

The demolition program has raised some concerns among neighboring residents, primarily over the impact that accumulated mold and other substances in the homes could have on air quality and health during the project.

“It’s right next door to me, right next to my living room,” said Regina Birchler, of Bullard Drive. “What am I supposed to do?”

Parlow said the DEP’s contractors will spray down each home during demolition to stop mold spores and similar hazardous materials from going airborne. Asbestos abatements will be performed before demolition begins, and inspections of the interior and exterior of each home will commence prior to the project getting underway.