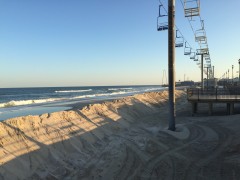 Seaside Heights officials voted in favor of hiring an engineering firm to help make its case to receive federal Sandy recovery dollars to fund a sea wall similar to the one built in Brick and Mantoloking.

The borough will utilize the services of Matrix New World Engineering to conduct a feasibility study on a steel sea wall in Seaside Heights, in hopes of securing federal funding to help build it. The borough will seek funding estimated in the millions of dollars from the Federal Emergency Management Agency to pay for the wall, said Borough Administrator Christopher Vaz. The funding would come from Sandy recovery appropriations.

“The idea is, we’re going to get this engineer on board, and he’s going to do a feasibility study,” said Vaz. “We’re going present that to FEMA in the context of asking them to approve more money for the project.”


Seaside Heights officials are favoring the sea wall to work to work in tandem with dunes, but may ultimately try to convince another federal agency – the U.S. Army Corps of Engineers – that the wall can provide a level of protection to the extent that a dune-building project could be scaled back. Local business owners as well as borough officials have expressed concern that large dunes could block the view of the ocean from the boardwalk.

“It’s not in lieu of dunes at this point, it’s in addition to dunes,” said Vaz. “We’re going to try to broach that subject as well – if we build this sea wall to a certain standard, will we be able to not have dunes? If we can do a seawall that’s going to be as effective [as dunes], we’ll ask if the Army Corps can look at the project.”

Borough officials are not concerned that building a sea wall could lead to the 10-to-20 foot drops that have been scoured out where a steel sea wall was constructed along the length of the oceanfront in Brick and Mantoloking since the environment in Seaside Heights is different in terms of elevations.

“For those of us who have been in Seaside forever, we don’t see that happening,” said Vaz.