Pair Arrested in Seaside Heights for 3AM Robbery of 7-Eleven Store, Drugs 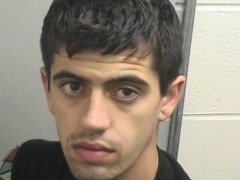 Police arrested two men and charged them with the overnight robbery of a 7-Eleven store on Route 37 East in Toms River and possession of marijuana and 300 Xanax pills.

Igor Gonzalez, 19, of Mendham, and a 17-year-old male from Toms River were located in Seaside Heights by officers from the Ocean County Sheriff’s Department after a 3:03 a.m. robbery at the 7-Eleven store at Route 37 East and Garfield Avenue, according to police spokesman Ralph Stocco. During the robbery, Stocco said, a young male wearing sunglasses handed the store clerk a note stating “let’s make this easy” and demanding $1,000.

The clerk refused and the man fled in a BMW, which was spotted in Seaside Heights within an hour, Stocco said. Officers Stephen Capoano and P. Sickinger, who were on supplemental patrol, detained the vehicle and its occupants at the intersection of Lincoln Avenue and Ocean Terrace until the arrival of Toms River Police investigators. Toms River Officer Lawrence DiFabio arrived in Seaside Heights and determined that the two men inside of the vehicle were the ones responsible for the incident at the 7-Eleven, Stocco said.


The investigation determined that Gonzalez was the driver of the 2003 BMW and his passenger, the juvenile from King Street in Toms River, was the one who entered the store intent on committing the robbery of the clerk, according to Stocco.

Both suspects remain held on charges of second degree robbery and possession of marijuana as well as 300 Xanax pills. Gonzalez is being held on $75,000 bail and the juvenile will be housed in the Ocean County Juvenile Detention Center with no bail, pending an appearance before a judge, Stocco said.