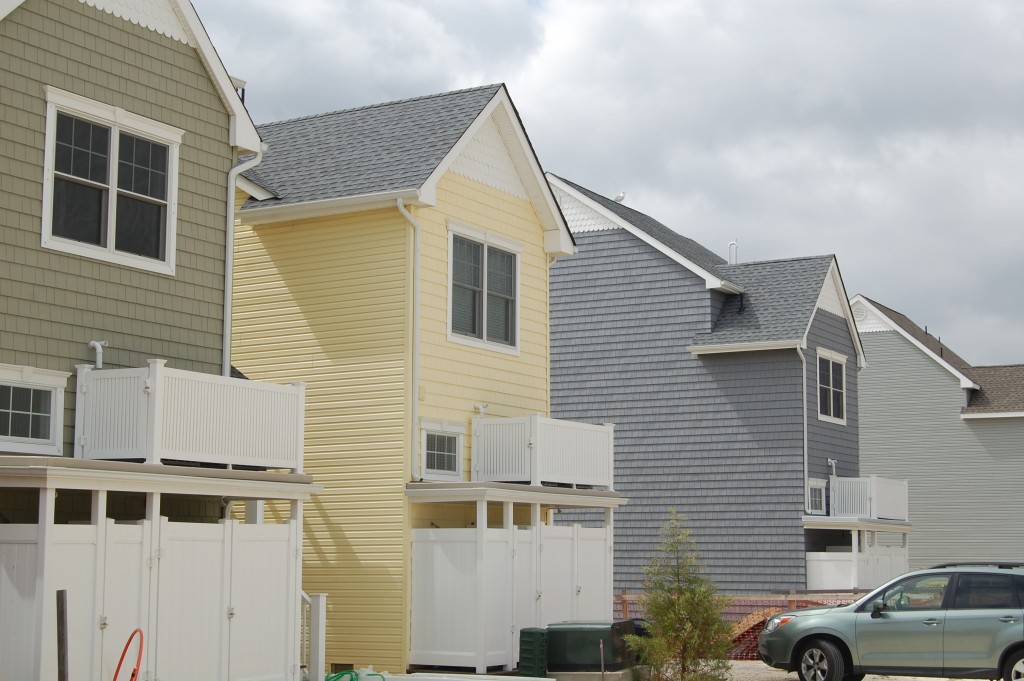 A few years ago, with the borough in tatters from Superstorm Sandy and its reputation still suffering the residual ill-effects from reality television madness, the idea of redeveloping Seaside Heights with modern, affordable, single-family homes seemed like an uncertain dream for another time.

Island Beach Way, a development of 26 single-family homes between Sherman and Grant avenues, is nearly half-sold-out, with construction crews working daily to pour foundations before the cold winter weather sets in. The site of the former Ice House, Whitewater Rapids and Rainbow Rapids miniature golf course, Island Beach Way is what many residents and borough officials hope can serve as a model for what residential development in Seaside Heights should look like. 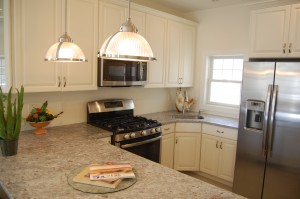 “People are starting to come around,” said Scott Ruerup, a borough resident, former planning board member and current real estate agent with the Birchler agency in charge of sales for the development. “We’ve had a bad reputation for a long time, we all know that and there’s no getting around that, but the last mayor started the turnaround and the new town administrator has taken a huge leap, bringing all kinds of family oriented programs into the town.”

The dozen homes that have sold thus far are being occupied by a mix of year-round residents, snowbirds and summer residents, Ruerup said. With three bedrooms and two-and-a-half baths each, the homes – which range from 1,260 square feet to 1,850 square feet depending on the floor plan – start at $339,000, a bargain on a barrier island where similarly sized new construction often approaches nearly double the price. With a turnaround in Seaside Heights squarely underway, Ruerup is finding success convincing prospective buyers that the borough offers a bright future at an affordable price.

Seaside Heights’ focus on family entertainment replacing the raucous nightlife scene portrayed on MTV’s “Jersey Shore” is driving much of the interest in the project. 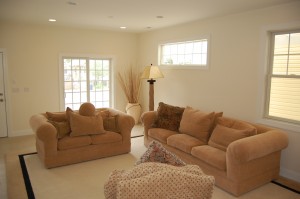 “That helps the businesses, that helps the town and it helps the real estate values,” Ruerup said. “We hope that more people look at these type of houses and try to build the same kind of houses. We really hope the empty lot across the street on Sherman is going to go the same way.”

The homes themselves divide their interior space between either two or three floors. The three-floor models include a top-floor bonus room – perfect for entertaining – with an extra-large deck. The exterior of the homes, painted in cheery colors with an oyster-shell private drive in the rear, envelope modern interiors which emphasize brightness and make excellent use of space. Each of the homes come with an outdoor shower, stainless steel GE appliances powered by natural gas, dual-zone heating and central air conditioning, options for either ceramic tile or hardwood flooring and a laundry area. Technology options range from central acoustical speakers throughout the home to WiFi-enabled thermostats. All of the homes comply with current floodplain regulations.

A homeowners association will maintain outdoor landscaping and the oyster shell road for $55 a month. Taxes average about $7,800 with five years of initial abatements which bring down the cost during those years. 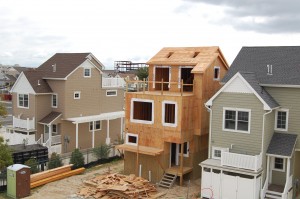 Island Beach Way may be the first of several new development projects in the borough. Last month, officials revealed that they are considering a wide-scale redevelopment efforts that would improve the Boulevard business district as well as plots of land currently occupied by motels. In a turn-around plan started by former mayor William Akers and continuing at an even more rapid pace under new Borough Administrator Christopher Vaz and Mayor Anthony Vaz, there is a concerted-effort to make the borough more attractive to developers interested in, potentially, constructing similar projects.

“We are getting families back to this town,” Borough Attorney George Gilmore said at a meeting last month. “I grew up in Seaside Heights. In the ’50s, that’s all you had. In the ’80s there was a change, but now it’s changing back.”

Island Beach Way seems to be leading the charge.

“Everybody in town is pretty excited, even more so now that they’re seeing it come to fruition and seeing how it looks,” Ruerup said.