Funtown Pier Rebuild Back On: Hope For Memorial Day Opening, Rides to be Proposed 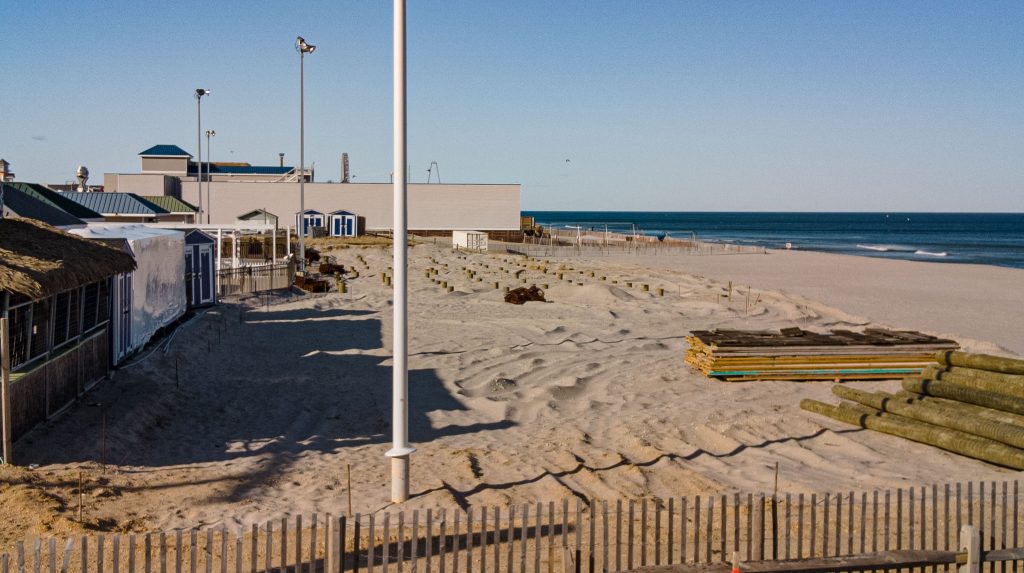 The first phase of the reconstruction of Funtown Pier in Seaside Park got a green-light from the borough’s planning board Tuesday night, however the pier’s owner, William Major, must complete the process of obtaining various state permits before construction can restart.

Major appeared with his attorney, Stephen Leone, and several land use professionals at the hearing, which was scheduled after work to begin installing pilings to support the new pier was stopped by the borough. Local officials held that despite having obtained certain permits and approvals, a final site plan had never been approved by the town itself – a condition that must be fulfilled in order to utilize state and federal permits that are required to build a structure over the beachfront and modify the dune line.

Leone explained to board members that his client’s company was under the impression that there was no obligation to submit a new site plan to the borough because the pier was going to be rebuilt in its old footprint and no structures were proposed to be built on top of the pier. Major and his team had planned to submit a new application before the board after the pier itself was constructed in order to propose rides and attractions that would be built atop it. 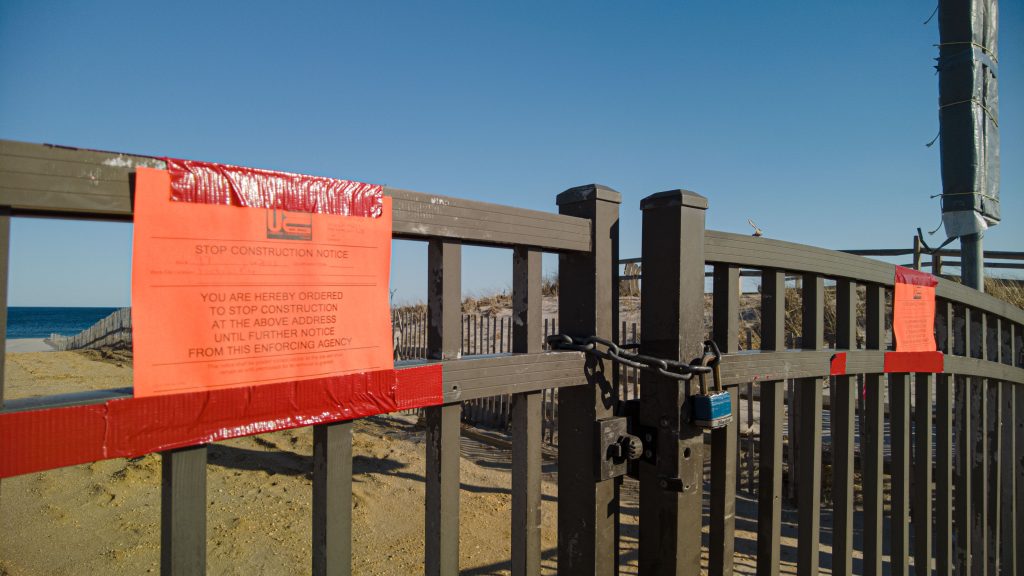 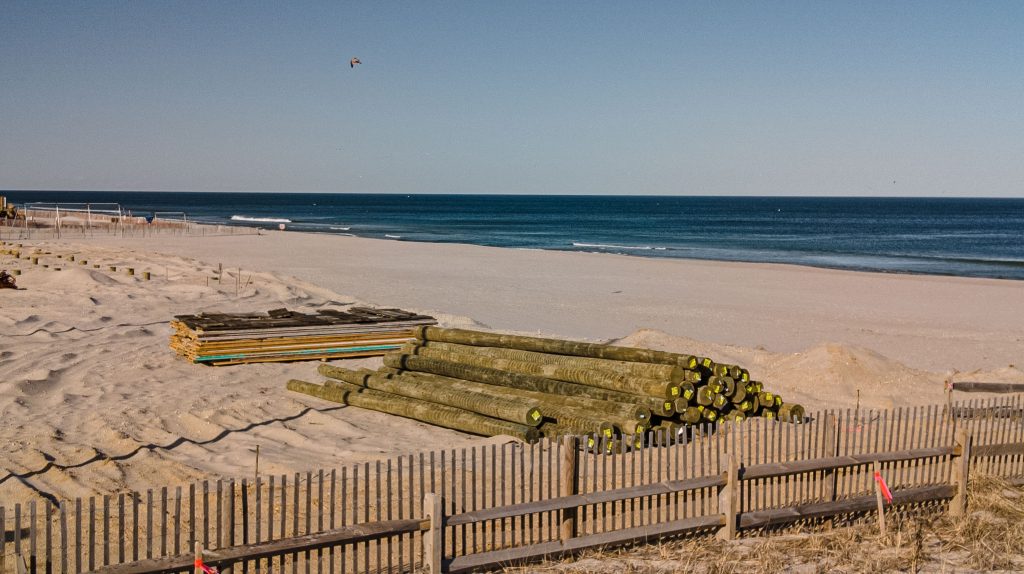 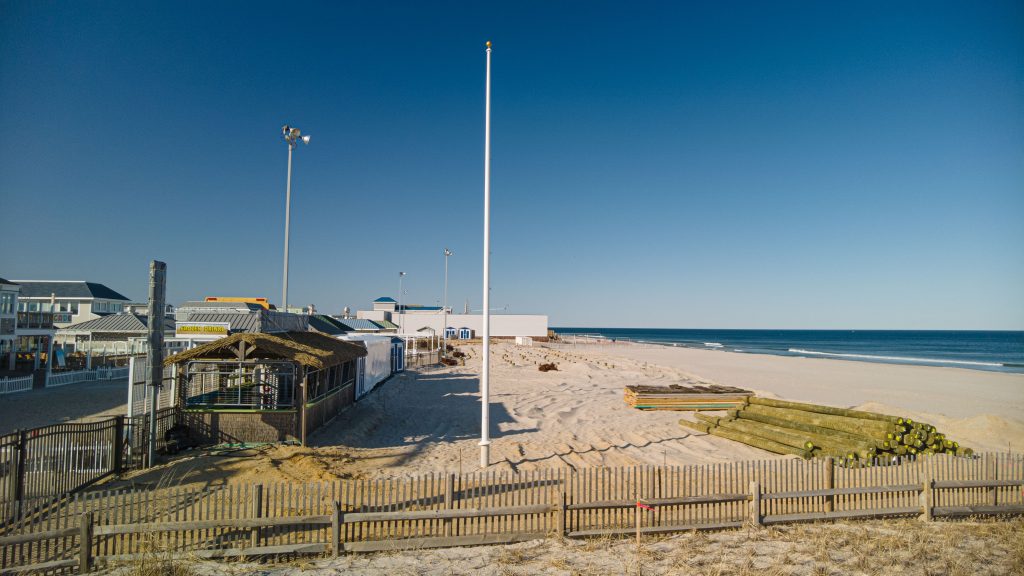 “We hired a large crew to come down and place the concrete and rebar, but we didn’t get that far,” Major told board member, adding that he spent $45,000 on pilings, $68,000 on reinforced steel and more to drive the piles into the sand. “We want to set amusements on top of it without breaking regulations, so we had to come back.”

Funtown Pier, before being decimated during Superstorm Sandy and destroyed in the 2013 boardwalk fire, was a sprawling amusement pier that measures about 120,000 square feet in area. The first phase of reconstruction will include a portion that will measure about 29,000 square feet. It will take up the entirety of the south-to-north with of the property, 501-feet, and extend about 80 feet west-to-east over the sand. Leone said, and e-mails from state officials obtained by Shorebeat confirmed, that the state Department of Environmental Protection as well as the Army Corps of Engineers indicated there was no issue with a phased rebuild, but local approval was required. After a marathon round of testimony that lasted about three hours, the board ultimately gave approval for Major to begin the phased reconstruction plan once all of the necessary approvals between the federal, state and local governments are confirmed.

Several years ago, Major proposed an ambitious return for Funtown Pier. It would included high-end thrill rides that would have stood about 300 feet in the air. But borough officials refused to allow any rides higher than 150 feet, leading Major to doubt whether the cost of rebuilding the pier could be justified without the return that large attractions would produce.

Now, Major said he intends on a future proposal for rides on the pier, but described them mainly as “kiddie rides.” In the mean time, the pier will serve as a feature of the overall Funtown Beach property – a BYOB privately-operated beach with food, drinks and amenities.

“This season we’d like to have some tables and benches,” Major said. A ticket booth will be on the deck and showers will be on the deck as well, pending construction. The rides, he said, would likely be presented to the planning board for approval before the 2023 summer season, but time has already run out to develop Funtown to that level for the upcoming 2022 summer.

How Will It Be Built?

The pier itself will be built using a piling foundation, topped by concrete and rebar – a step that will add cost, but allow the pier to be more resistant to any fires, storms or other emergencies that may emerge. 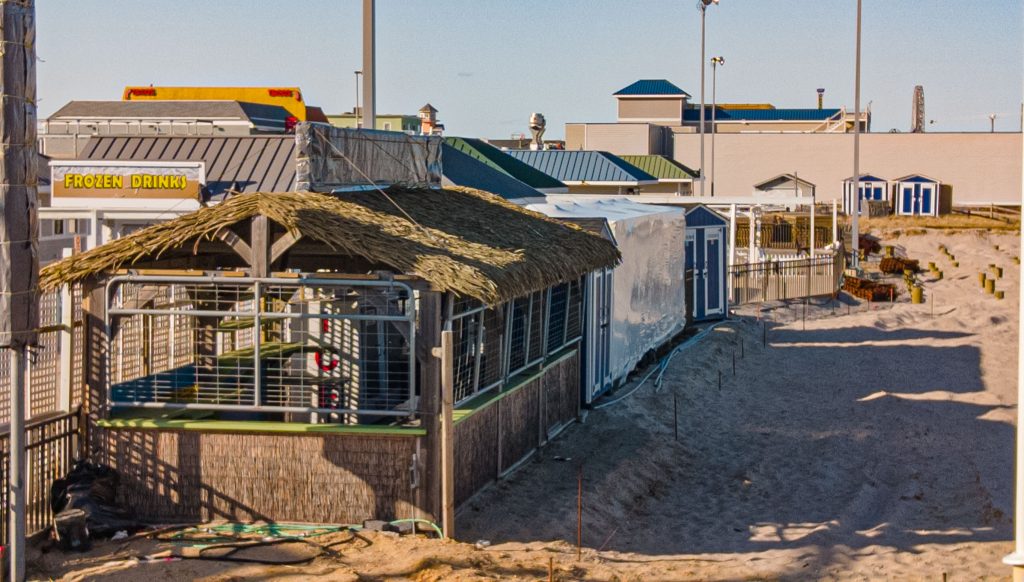 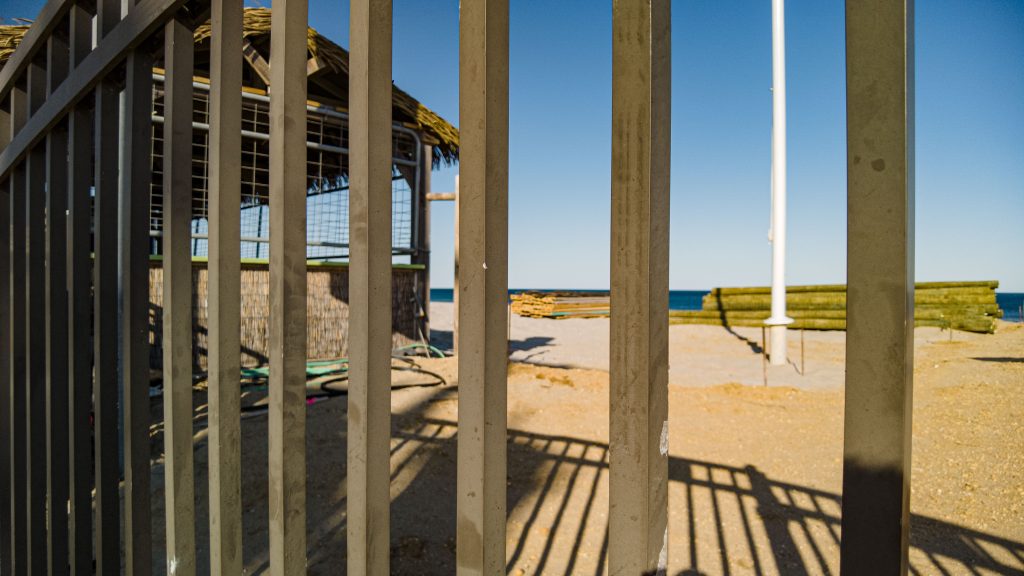 Frank Little, an engineer working on the project, told board members that in his discussions with representatives from the U.S. Army Corps of Engineers, it was determined that rebuilding the pier would likely improve the integrity of the existing boardwalk and the businesses built around it. A similar determination was made by federal officials in Seaside Heights, where the expansion of Casino Pier was designed to mesh with the engineered dune system. The 16-foot dune that is presently in place will be reduced to 12 feet, but the pier will act as both an anchor and an impact sponge during storms.

“The lowering of the sand dune and the construction of the deck over it are in full compliance with code,” said Little. “They see this deck as more protection against storm surge for the sand dunes. By putting this pier in, even in phases, it’s going to provide more protection per linear foot.”

A piling to support the pier will be placed every eight feet in the north-south direction, and every ten feet in the east-west direction.

Joseph Griffin, another engineer working on the project, said the pier will support 40 tons of weight and, in an emergency, would likely be able to accommodate police vehicles and ambulances.

“The typical New Jersey building requirements for a boardwalk is 100 pounds per square foot while this is about five times that and can support emergency vehicles,” said Griffin. “The whole idea behind the piles is that once they are driven, there will be sufficient embedment. If any portion of this deck were to be undermined, it is self-supporting and can still support loads.”

Essentially, it is unlikely that even in a major storm, the pier itself could suffer the same level of damage seen in Superstorm Sandy, including an infamous collapse that occurred at Casino Pier. For day-to-day use, however, vehicles will not be allowed to operate on the pier except for a golf cart-style utility vehicle. A pickup truck will also come once per day to collect refuse and fill the tank of the golf cart. Funtown’s representatives reiterated the importance of the concrete-paved pier surface.

“We designed this so it can be undermined and still support the weight it’s designed to support,” said Griffin. “If you have a structure sitting on top of the sand and the sand underneath starts to scour, wave action will be prevented from going forward and it will have a much better chance of surviving and protecting that sand underneath.”

There were some concerns regarding the phased approach to the rebuild, including the affect it may or may not have on surrounding beaches. Mayor John A. Peterson said during Sandy, the only waves to breach dunes occurred just south of the pier and near 14th Street.

“I’m concerned about our beach, our boardwalk and the homes that are right there – one of which happens to be town hall,” Peterson said. “Those are the two areas where the waves came over. What happens adjacent does have an effect on us.”

After discussions continued, board members ultimately decided that they did not want to force Major to return for another hearing after the phased construction plan was articulated. The board did require, however, that the phasing be formally confirmed and that the borough’s regulations are adhered to as a condition of state development permits.

In essence, the board approved the first phase of the project so long as non-local approval has been confirmed. Major will have to return to the board before any structures are built on the pier besides showers and some accessories and amenities that may be built this year. In addition to the rides, an administration building is also planned to be built on the pier.

“If we ordered rides, they’d be on the sand at this point,” joked Leone. “This summer, the beach will continue to operate the way it has, plus the pier, if it is able to be built in time.”

“That’s why we were trying to get the right to go forward subject to the outside approvals,” Leone explained. “Everyone was very cooperative and it worked out well, I think.”