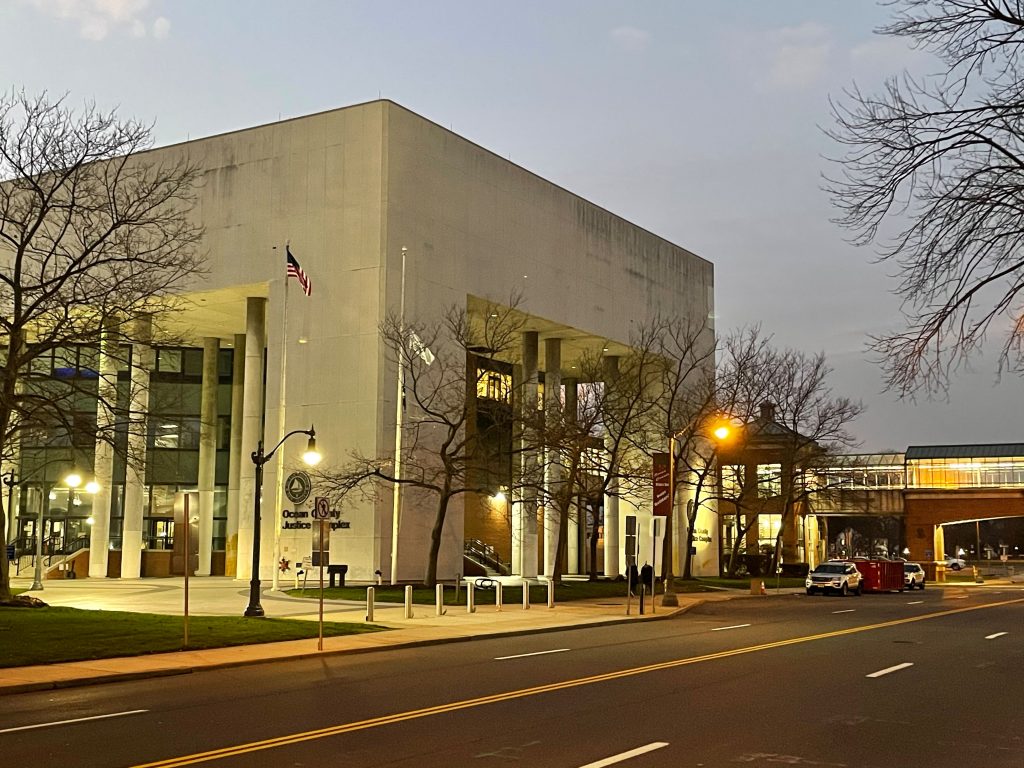 Ocean County officials are moving forward with a project that will produce a major expansion of the Ocean County Justice Complex on Hooper Avenue.

The county freeholders on Wednesday announced their intention to award a $3,374,635 contract to Clarke Caton Hintz, a Trenton-based architectural firm, to design what is estimated to be a $50 million project to expand the courthouse. Officials have said the complex will be expanded northward in an area that is currently occupied by a parking lot, near Toms River High School South.

The project will not only expand the complex, but re-imagine how it runs. There will be a single, centrally-located entrance which will boost security while freeing up county sheriff’s officers from having to man multiple entrances. The county will realign the location of courtrooms and judges’ chambers, while cramped elevators could be replaced with large escalators that will better serve those doing business at the courthouse. That plan even promotes social distancing in an age where people are more concerned than ever about personal space and germs.


“Many of the reasons why buildings in New York City and Philadelphia are closed down have to do with elevators,” said Freeholder Joseph Vicari. “If you look at the new hospitals and sports stadiums, they often have escalators. It’s not only safer for security reasons, but it will allow the building to be occupied at times like these.”

The county is also envisioning the potential to create shared spaces that can be adapted to different roles as the way the court system works evolves.

“Each judge should, in my opinion, have their own chambers, but the courts are changing,” Vicari said.

Freeholder Jack Kelly said the county is working with the state Administrative Office of the Courts, a state agency, to design the building to New Jersey’s legal standards, which currently do not allow judges’ chambers to be shared. The court system, however, is in a state of transition – partly because of coronavirus and partly because of new laws such as bail reform.

“One of the interesting proposals was to have the chambers on a separate floor,” said Kelly.

Mott MacDonald, an international consulting and engineering firm, previously worked with the county to develop initial guidance for the project. That firm found that the county is faced with annual lease agreements in the hundreds of thousands of dollars as well as the upkeep and maintenance of county-owned buildings that are separate from the courthouse. For example, there are currently 13 different facilities scattered around the downtown area that serve judicial functions. Multiple family courtrooms, drug court, probation services and even a criminal courtroom are located off-premises.

The cost of securing court facilities is measured in the millions annually. There are nine separate security checkpoints due to the scattered nature of the buildings. The consulting firm found that each checkpoint requires the supervision of three county sheriff’s officers whose salary and benefits add up to $125,885 per year. Three offices manning nine checkpoints comes to a total cost of $3,398,895 annually. Under the proposal, building an addition onto the main Justice Complex would eliminate the need for seven of the nine checkpoints, reducing overall costs, combined with the savings from giving up leased buildings.

Security concerns are real, according to those who work in the court system. Previously, when the project was first discussed, Assignment Judge Marlene Lynch Ford told the freeholders that there have been breaches in the past.

“I’ve had judges in some of these out-buildings accosted by angry litigants on their way out, and what we’re really concerned about is the safety of the people of Ocean County who we service,” said Ford.

Kelly said Wednesday that the courthouse has been in need of a renovation and centralization for decades.

“It’s something I’ve been talking about for 20 years, since Judge [Eugene] Serpentelli was in office,” Kelly said.

The freeholders are expected to formally award the contract at their meeting next week, which will be the final meeting of the year. The contract only represents the design of the complex – not its construction. Work is currently slated to begin in 2023 and be completed in 2025.

Funding for the design phase of the project was appropriated in 2019, Kelly said.