Route 37 Mathis Bridge to Reopen May 10 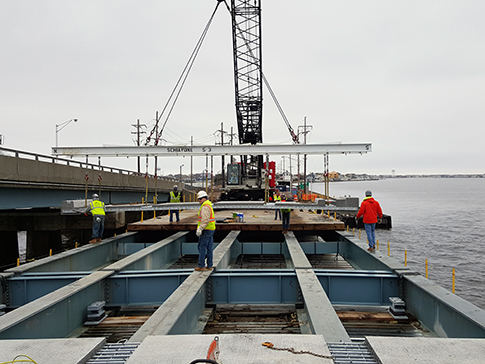 Toms River officials say they have been notified by the state Department of Transportation that the Thomas A. Mathis Bridge, which carries eastbound traffic on Route 37 from the mainland to the barrier island, will reopen before Memorial Day weekend.

Councilwoman Maria Maruca said the bridge is set to reopen to traffic May 10. It has been closed since Sept. 2016 as part of a major rehabilitation project. As the work has been ongoing, eastbound traffic to the island has been shifted to a lane of the J. Stanley Tunney bridge, a fixed-span that usually carries westbound-only traffic.

As for the what motorists may notice when they traverse the bridge once it reopens: a new driving surface across the entire span and taller, blue side rails, some of which were in place last summer.


Last summer, the bridge was plagued with electrical issues that left it in the open position on numerous occasions, leading to massive traffic backups. Most of the electrical upgrades that are planned as part of the project have been completed, so the bridge should be more reliable this summer, township officials said.

After the summer, the bridge will close for one more fall and winter while crews complete the overall project, which is slated to come to a conclusion by Memorial Day 2018.

The Mathis Bridge deck width will be improved to provide three ten-foot wide lanes. According to state officials, the middle lane of the bridge is currently 10 feet wide, but the two outer lanes are only nine feet wide.