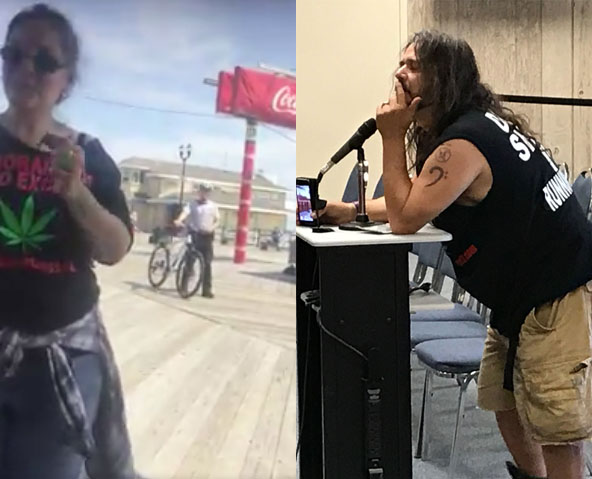 A couple who posted a video showing Seaside Heights police officers asking them to leave the boardwalk area to smoke medical marijuana told borough officials at a council meeting Wednesday that the substance should, indeed, be allowed along the oceanfront.

Edward “Lefty” Grimes, one of the men in the video, adorned a t-shirt with a marijuana leaf on the front and the slogan, “Don’t Shoot, I’m Running Away,” on the back, took out a bag of medical marijuana before the council members and asked why his friend, who he said suffers from multiple sclerosis, was asked to leave the boardwalk after lighting up a joint at the MS Walk over the weekend.


Neither Grimes nor his friend, Michele Burrows, were arrested or charged in the incident, in which code enforcement officers called police, who determined that medical marijuana was not allowed in a designated smoking area on the boardwalk.

“It’s not the police’s fault, they’re doing what they can,” Grimes admitted. “They said they didn’t know where you could use your medical cannabis, but we couldn’t use it on the boardwalk.”

The vide showed police officers asking the couple to use their marijuana in a private area, since it was not allowed on the boardwalk.

“If she falls down and has a seizure, where do we drag her body to?” Grimes asked council members. “It’s about having compassion for sick people.”

Borough Attorney Jean Cipriani said the state’s medical marijuana law, known as the Compassionate Use of Marijuana Act, or CUMA, sets guidelines for the use of the substance that includes a passage which prohibits its use in any “park, beach or recreation center.”

“The boardwalk is, in its entirety, a recreation center,” said Cipriani. “Borough code states the entire oceanfront and land owned by the municipality upon the oceanfront is in a recreational zone.”

Grimes said in a similar incident in Atlantic City, he was told the boardwalk was considered a park.

“Without the marijuana, I would not be able to walk your boardwalk,” Burrows, an MS patient, later said. “I give you guys business and I love the boardwalk, but without the cannabis, I can’t even walk there.”

Cipriani said officials understood the couple’s position, and may look into future policies that would more clearly set forth where medical marijuana could be used in town.

“This is really the first time this issue has come before council, and you’ve certainly presented it in a strong way, and it will be considered,” said Cipriani. “It’s really a new issue for us.”