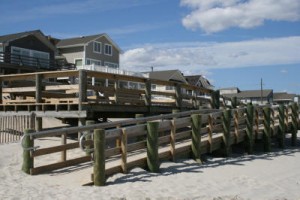 Lavallette is hoping to make Trenton Avenue’s beach entrance more accessible, looking for funding for a dune walkover there.

Councilwoman Anita Zalom reported that she attended a county Americans with Disabilities Act Accessibility committee, and state ADA compliance officials were there. Zalom invited the state officials to check out Trenton Avenue to see if the street could also receive funding for ADA upgrades.

Lavallette has funding to improve beach access at its three other wide streets, but its fourth, Trenton Avenue, is not currently in the plans, she said.


Zalom reached out to see if the ADA program specific to Superstorm Sandy impacted areas could apply to Trenton Avenue.

“We tried to get them down there to see what we have,” Zalom said. “Eventually they came to see, to assess, with the people who give all these moneys to help with Sandy. And thank you to Mr. Parlow who took time out of his busy schedule to get down there and meet with them.”
Chris Parlow, the Lavallette Business Administrator, would discuss the possibility of a more ADA-friendly Trenton Avenue, Zalom said.

Complicating the issue is the pending Army Corps of Engineers beach widening and dune replenishment project. Parlow said those ACE plans must be shared with the state ADA assessors to help decide any potential funding.

“They are going to try and push from their end the Army Corps position for funding the fourth street for ADA accessibility,” Parlow said. “As you recall we requested all four of our wide streets be made handicap accessible with a dune walkover.”

The borough is hoping the ACE and not the borough will pick up the cost of a Trenton Avenue walkover. They’ve already agreed on the three other wide street’s configurations: Philadelphia, New York and President.

“We have four that are double wide, so we are seeking more access for them,” said Mayor Walter Cicero. “It makes sense, you have more parking, you have head-in parking instead of parallel parking.”