Storms To Roll In After Midnight Monday, Linger Through Tuesday 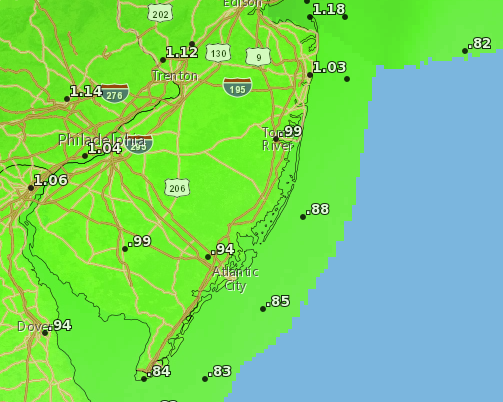 About an inch of rain is forecast by Tuesday afternoon, according to the National Weather Service. (Credit: NWS)

Forecasters with the National Weather Service say thunderstorms will begin to move into the Shore area after midnight Monday and continue through Tuesday evening.

After a partly cloudy day on Monday with a high of 79, the storms will begin to roll in after midnight, the National Weather Service said. Some of the storms could produce heavy rain, though winds – except during thunderstorms – will not be strong. There’s an 80 percent chance of rain overnight between Monday and Tuesday.

Showers and thunderstorms will continue before 8 a.m. Tuesday, then showers and possibly a thunderstorm in the morning hours with an elevated chance of additional thunderstorms after 2 p.m. Some of the storms could produce heavy rain; new rainfall amounts between a half and three quarters of an inch are possible.


A chance of showers is possible after 8 p.m. Tuesday, but skies will be otherwise mostly cloudy with a low of 68 degrees.

The sun will return Wednesday with a high of 83.