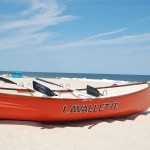 Ralph Gorga loved Lavallette and loved the ocean. He fought hard against the former Ciba-Geigy company’s outfall pipeline which protruded into the Atlantic in Ortley Beach, served as mayor from 1979 to 1987, and in his later years, even signed up to be a beach badge checker for no salary.

“I think he was one of the highest sellers,” recalled Councilman Robert Lamb.

So after Gorga died in 2007 from complications related to heart surgery, the borough honored him with a plaque along the beach walk at New Brunswick Avenue. The plaque was washed away in Superstorm Sandy, leaving the neighborhood without recognition for one of its most revered residents for three years.


“He really worked very hard for us,” said Council President Anita Zalom, who asked her fellow members of the governing body to approve a new plaque honoring Gorga’s work in town.

The council obliged, easily approving the $150 or so it will cost to have a new plaque made up.

Gorga, who had lived in town from 1948 to his death in 2007, served in the United States Army before moving to Lavallette and opening up a construction company. He served as a council member before being elected mayor, but was most well known for his presence at the beach and among friends.

“He worked tirelessly for no money; one time he was in a wheelchair up there,” Lamb said.