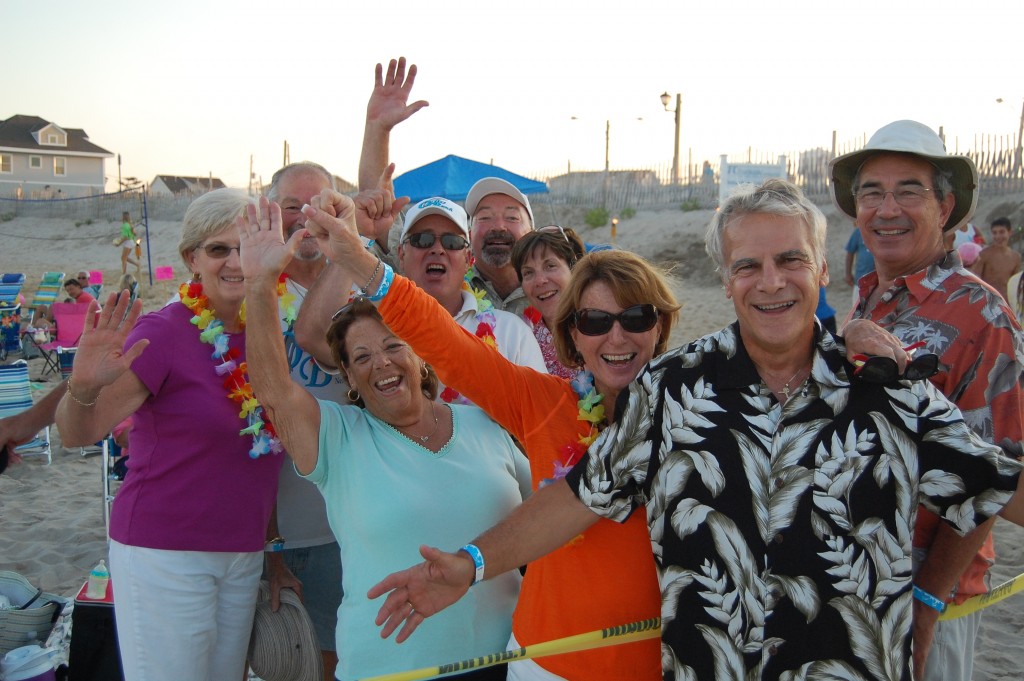 Against a perfect, dark-blue sky at dusk, a sailboat calmly passed in the ocean as 500 Ortley Beach residents celebrated the summer on the sand at the Third Avenue beach Saturday night.

The hundreds of residents enjoyed plenty of food grilled up in the beach parking area, a video game stand, face painting, block-versus-block games of tug-of-war on the sand, and beach volleyball. Tiki torches lit the way to the beach, and tropical themed lights kept the party going after sunset.

“It’s wonderful,” said Robert Nisivoccia, who was enjoying a night on the beach with friends, all forming a circle in the sand with their beach chairs. “It’s about time Ortley Beach came together as a community to have something like this. We were lucky, but a lot of people are still struggling, and it’s a shame. It’s good to see we’re puling things back together as a town.”

The Beach Jam was as much a celebration of the neighborhood’s continued recovery as it was an opportunity for neighbors to celebrate the summer season.

“Right after Superstorm Sandy we had a little get-together in the A&P parking lot, because we had nowhere else to go, and one of our members said, ‘Once we’re back, let’s have a beach jam and let’s have a really good time,’ said Paul Jeffrey, president of the Ortley Beach Voters and Taxpayers Association, which put together the event.

The celebration was “reflective of the ongoing upbeat attitude that we will come back,” said Jeffrey, who organized the Beach Jam with Rick Jurgens, the man who made the suggestion in the wake of the storm. “Probably only half the people are back in their homes, but they want to come out and celebrate being here.”

Jeffrey said he hopes the Beach Jam can be an annual celebration, and next year’s even will be even larger. Organizers had to cap the party at 500 people because that is how much food had been ordered, but about 200 more wanted to come, Jeffrey said. Much of the food was donated, and the local business community chipped in to make the Beach Jam even more memorable.

Spirits liquor store provided all the ice, A&P donated 600 bottles of water, and there were $800 in gift certificates donated by local businesses, Jeffrey said.