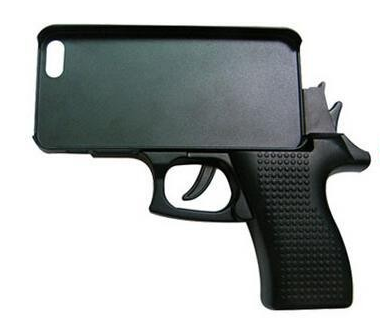 Officials in Ocean County are hoping a dangerous situation that played out on a Canadian beach last weekend does not repeat itself locally.

A Royal Canadian Mounted Police SWAT team stormed a beach in Manitoba after beachgoers called to report a man with a gun tucked in his pocket was walking along the shore. Officers carrying rifles and stun guns, among other weapons, responded to the beach only to find out that the “gun” was, in fact, a gun-shaped iPhone case, according to the Winnipeg Sun.

Ocean County officials were among the first in the nation to take note of the gun-shaped case earlier this year and put out a warning before the busy summer season began, leading to more people being outdoors.


“Well, hate to say we told you so, but ‘we told you so,'” said Al Della Fave, spokesman for the Ocean County Prosecutor’s Office. “The only redeeming things to come out of this event is that, thank God it did not end in a tragedy, and hopefully it will serve to highlight how truly unwise it is to use this product.”

An RCMP spokesman said officers had no choice but to respond in force, since they believed they may have been dealing with an actual gunman on the beach. The man carrying the phone case was not charged in the incident, and voluntarily turned the case over to police.

“Change one element of this event and the end results could have taken an awful turn,” Della Fave said. “In this case: daylight hours for improved visibility and the presence of the man’s family contributed to a happy ending.  Most favorable is the man learning a valuable lesson in common sense.”

“A police officer’s job is hard enough, without having to make a split second decision in the dark of night when someone decides without thinking to pull this out while stopped for a motor vehicle violation,” Della Fave said.