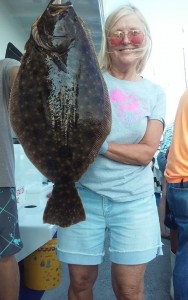 As the calendar looks more and more threatening – September, the unofficial end of summer, is just days away – fluke fishing remains good throughout Ocean County, with warm waters keeping the fish active in most of their usual haunts for this time of year.

Meanwhile, it’s looking more and more like a good striped bass season is ahead, and unlike the last few years many local anglers are predicting we could be in for an early start.

“With these cooler nights expect the bass here very soon,” a report from Grumpy’s Tackle in Seaside Park said. “Bait continues to stage up in the bay, ready for the fall migration.”


In the interim, fluking is an angler’s best bet. The suds offer plenty of action, the folks at Grumpy’s say, with some bluefish mixed in. There’s also blowfish to be caught in the bay – they’re “small but plentiful,” the report said.

There’s also plenty of baitfish present in the Toms River, said Mario from Murphy’s Hook House on Route 37 east. The surf is offering scattered fluke and bluefish, though many of the fluke are small. Some drum are also being caught in the ocean.

“Just a reminder that the puppy drum that are around have to be 16 inches to keep so make sure you throw those little ones back,” the report from Murphy’s said.

Crabbing in the northern half of Barnegat Bay is holding steady, locals said all week, and the Murphy’s report indicated the crabbing in the river was good as well. Another great crabbing spot is near Gull Island in Point Pleasant Beach (tip courtesy of Alex’s Inlet Bait and Tackle).

Speaking of Point Pleasant Beach, the crew at Alex’s B&T know a few guys who fished the surf in between the inlet jetty and the Tiki Bar pier one night this week and managed to catch some striped bass. They were throwing SP minnows tipped with Berkeley Gulp jerk shads. Again, good signs for the fall run! The shop also reported fluke being caught at “the wall” at the inlet.

Fluke action is also holding steady on the party boats out of Manasquan Inlet, with the Queen Mary getting into some mackerel action this week.

“To me, more bites have been coming on the gulp and bucktails,” Capt. Matt from the Norma K III said in a report this week. “Green and nuclear chicken gulps have been working the best.”

The photo at the top of this story this week is from the NKIII – they know what they’re talking about.

As usual, feel free to reach out with tips, photos and reports. Catch me at daniel@shorebeat.com. See you in September!