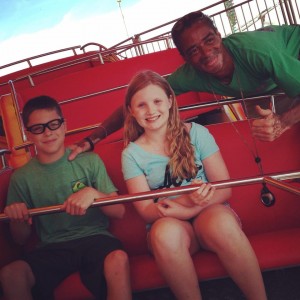 DJ Charles with some young fans, in a 2014 photo. (Photo: Welcome Back Musik Express and DJ Charles/Facebook group.)

For many Seaside Heights boardwalk aficionados, the day the music died came last week. That’s when word began to spread that Charles Love, the locally-famous DJ known for injecting his infectious personality into the Music Express ride at Casino Pier, was no longer at the controls.

Pier officials told Shorebeat on Tuesday he will not be back.

Love, known as DJ Charles, had worked on the ride since 2002. While music blasted in the borough’s many nightclubs, fans of hip-hop music could usually find an even better mix just feet away on the pier, where crowds often gathered just to hear Love’s song selections and mixes, coupled with his impromptu commentary on the smiling children and teens on board the small roller coaster ride.


But for reasons still unknown, Charles was unceremoniously fired from his position last week, leading to an outcry in social media surrounding his departure. At least one Facebook group calling for his reinstatement has already been formed.

“The Casino Pier will not be the same,” Nicole Trippodo Lubera posted in the Seaside Heights Boardwalk group on Facebook. “The music was great throughout the whole pier from Charles. My daughter loves that ride and would never go on it unless Charles was working.”

“This is the saddest way I can imagine to end the summer,” said Tracy Hemmer Garbacki. “DJ Charles is the voice of that pier.”

A Casino Pier spokesperson said Tuesday that the company does not discuss the termination of employees publicly, but Love “will not be returning to Casino Pier.”

“Casino Pier has company policies and procedures in place that apply to all employees and discipline guidelines when those procedures are not followed,” said Maria Mastoris, the pier’s marketing manager. “While Charles was a good DJ, it is just as important to being a good employee. His termination followed our procedures and he will not be returning to Casino Pier.”

Love did not respond to a request from Shorebeat for comment, however photos posted on the Seaside Heights Boardwalk Facebook page showed him working at a boardwalk game booth last weekend.